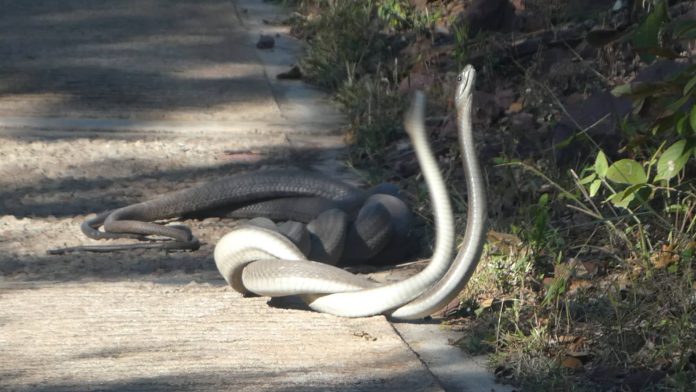 Staff at Bambelela Wildlife Care And Vervet Monkey Rehabilitation centre in Bela Bela, Limpopo, came across a rare sighting on their way home from a monkey release site a couple of days ago – two black mamba snakes (Dendroaspis polylepis) were locked in battle, their bodies entwined, as each tried to pin his rival’s head down.

The ritualised “plaiting combat” – which is sometimes mistaken for a dance of love and mating – usually happens when there’s a female in the vicinity, within approximately 10 metres. Whoever wins the battle, and is most assertive, gets to mate with the female. Males will try to mate with as many females as they can fight off other males for… whilst females mate with just one male per season (and some species can store his sperms for months… even years!). Bambelela conservationist Silke von Eynern uploaded this incredible series of photos… and the video at the bottom of the page, taken by Bambelela volunteer Aylon Steinberg.

Mating season is usually between spring and summer, but perhaps the warmer temperatures have extended the season. According to National Geographic, the snakes occasionally bite each other but killing each other is not the goal. Black mambas are one of the deadliest snakes in the world. They grow up to 4.3 metres, and unless anti-venom is administered quickly, a bite will normally kill a human.