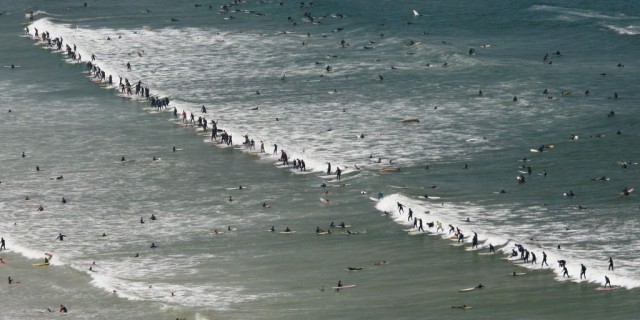 More than 100 surfers rode a wave at the Earthwave beach festival in Muizenberg, Cape Town on Sunday 4 October to break the Guinness World Record for the ‘most surfers riding the same wave’.

“We estimated that there were more than 120 surfers on the fifth of the seven waves surfed at Muizenberg during Earthwave,’ said Paul Botha of Kahuna Promotions, the founders of the event that leverages the publicity generated by the world record attempt to promote awareness of climate change and sustainable lifestyles.

“However, the photographic evidence we have so far shows that there were 103 on the same wave, which is enough to overtake the record of 100 set by Earthwave Brazil in Santos last year,” Botha added. “We are still waiting for more images and video footage that we will submit to the Guinness World Record organisation in London to have the record ratified.”

In ideal sunshine conditions, a light offshore breeze and small 0.5 to one metre waves, a total of 443 surfers of all ages and abilities registered to try and bring the record back to Cape Town after Brazil had exceeded the 73 on one wave set at Muizenberg in 2006.

Five times the number in the water lined the beachfront cheering every attempt and urging their champions on as they rode the waves for five seconds before being counted, taking part in a host of fun-filled activities and fund-raising initiatives.

Activities included the inaugural Earthwave Longboard Classic, demos of SUP by Coreban, a talk entitled ‘Climate Change: How you can help’ presented by Augustine Morkel, estate manager of the internationally renowned Kirstenbosch Botanical Gardens, beach cleanups conducted by Ocean Minded, a Dig for Gold fund-raiser with prizes from the surf industry and local businesses and more.

The carbon footprint of the event was reduced by Metrorail allowing anyone with a surfboard to travel free on the train to and from Muizenberg while others could buy half-price fares to and from the destination. There were also specially demarcated bins to recycle the paper, plastic, glass and other refuse, minimal energy use and certificates of participation in the record-breaking event will be sent out digitally instead of being printed on paper.

The Earthwave event was also used as a forum to promote the Shark Spotters programme, the Save Our Seas Foundation, National Bandana day on 14 October for the Sunflower Fund and Cape Town Tourism’s ‘Live it, Love it, LOUDER!’ campaign for the city hosting the FIFA World Cup next year.

More on Earthwave, its aims and objectives, is available on the mini-site www.kahunasurf.co.za/kp/earthwave and on Wavescape.co.za, the event’s official digital media partner.

Earthwave is sanctioned by Surfing South Africa (SSA), the national controlling body for the sport and endorsed by the International Surfing Association (ISA) and Surfrider Foundation whose Argentina Chapter will be running the Earthwave event in that country.

Contact kahunasurf@mweb.co.za for further information on the Earthwave global surfing and sustainable lifestyles event and how to become part of this global movement.

check out Cape Town’s record-breaking surfers in action on video.