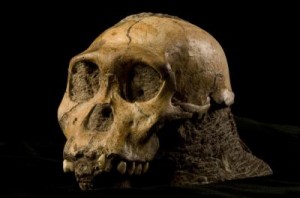 A brand new hominid species, which may just be the missing link, has been discovered in South Africa. The discovery of a young male fossil was quite aptly made by a young male – the 9-year-old son of a Wits palaeoanthropologist Professor Lee Berger.

The discovery of the new species was made in August 2008 in limestone cave deposits at Malapa, a World Heritage Site and area known as the ‘Cradle of Humankind’ 40km outside of Johannesburg.

Matthew Berger told the BBC that “I called my dad over and about five metres away he started swearing, and I was like ‘what did I do wrong?’ and he’s like, ‘nothing, nothing – you found a hominid’.”

A couple of days later an adult female fossil was found alongside the young male, together with the articulated skeletons of a sabre-toothed cat, antelope, hyena, wild dog, a horse, mice and rabbits. The international team of researchers, led by Prof Berger, who identified the skeletons have speculated that the fossils may be of a mother and her son and that all died suddenly, perhaps falling into or being trapped in some way in the cave. The bodies were then swept into a shallow underground lake or pool where they were preserved in a hard, concrete like substance known as calcified clastic sediment.

“One possible explanation for their entry into the cave could have been that they needed water,” said Dirks. “To explain the fossil assemblage and their well-preserved state, we would speculate that perhaps at the time of their death, the area in which sediba lived experienced a severe drought… Animals may have smelled the water, ventured in too deep, fallen down hidden shafts in the pitch dark, or got lost and died.”

Two papers related to this find, authored by Prof. Lee Berger and Prof. Paul Dirks (from James Cook University in Queensland, Australia), will be published in the journal Science today Friday 9 April 2010.

“These fossils give us an extraordinarily detailed look into a new chapter of human evolution, and provide a window into a critical period when hominids made the committed change from dependency on life in the trees to life on the ground,” said Berger. “Australopithecus sediba appears to present a mosaic of features demonstrating an animal comfortable in both worlds.”

He also explained the reason behind the naming of the species: “Sediba, which means natural spring, fountain or wellspring in Sotho, one of the 11 official languages of South Africa, was deemed an appropriate name for a species that might be the point from which the genus Homo arises. I believe that this is a good candidate for being the transitional species between the southern African ape-man Australopithecus africanus (like the Taung Child and Mrs. Ples) and either Homo habilis or even a direct ancestor of Homo erectus (like Turkana Boy, Java man or Peking man).”

The species has long arms, like an ape, short powerful hands, a very advanced pelvis (hip bone) and long legs capable of striding and possibly running like a human. It is likely that they could have climbed.

“It is estimated that they were both about 1.27 metres, although the child would certainly have grown taller. The female probably weighed about 33 kilograms and the child about 27 kilograms at the time of his death,” adds Prof. Berger. “The brain size of the juvenile was between 420 and 450 cubic centimetres, which is small (when compared to the human brain of about 1200 to 1600 cubic centimetres) but the shape of the brain seems to be more advanced than that of australopithecines.”

Through a combination of faunal, U-Pb and palaeomagnetic dating techniques, the age of the rocks encasing the fossils has been determined at 1.95-1.78 Ma. . Cosmogenic dating was used to interpret the landscape formation and to determine the depth of the cave at the time.

Fossil preparators have worked arduously over the last two years to extract the bones from the rock. About 60 leading scientists from around the world and tens of students have had the opportunity to work on these amazing fossils. The most sophisticated scanning technology has been used to unveil the secrets of the past.

The site continues to be explored and without a doubt there are more groundbreaking discoveries to come forth. In celebration of this find, the children of South Africa have been invited to develop a common name for the juvenile skeleton. The fossils are owned by the people of South Africa, and curated by the University of the Witwatersrand, Johannesburg.

What does Australopithecus sediba mean?

Australopithecus means “southern ape”, after the genus of the Taung child, named by Prof. Raymond Dart, also from the University of the Witwatersrand, Johannesburg. Sediba means natural spring, fountain or wellspring in Sotho, an appropriate name for a species that might be the point from which the genus Homo arises.

A hominid is a member of the taxonomic family that includes humans, chimpanzees, gorillas and their extinct ancestors. Hominins are members of the human branch after the human lineage split from that of chimpanzees, and thus include living humans and extinct human ancestors, such as the Australopiths. Hominins are characterised by bipedal locomotion, although this may not have been the case for the very earliest members of the group, and relatively small canine teeth. Later members of this group (those in the genus, Homo) are characterised by larger brains than those of living apes like chimpanzees, bonobos, gorillas, orangutans and gibbons.

How were the fossils dated?

They were dated using a variety of methods including Uranium-Lead, palaeomagnetic and faunal dating systems. Cosmogenic dating was used to interpret the landscape formation and to determine the depth of the cave at the time.

How were the individuals preserved?

The site where the fossils were discovered is technically the infill of a de-roofed cave that was about 50 metres underground 1.9 million years ago. The individuals appear to have fallen, along with other animals, into a deep cave, landing up on the floor for a few days or weeks. The bodies were then washed into an underground lake or pool probably pushed there by a large rainstorm. They did not travel far, maybe a few metres, where they were solidified, as if thrown into quick setting concrete. The rock they are preserved in is called calcified clastic sediment. Over the past 1.9 million years the land has eroded to expose the fossil bearing sediments.

Did they die at the same time, or was it a catastrophe?

The hominin skeletons were found with the bones either in partial articulation or in close anatomical association, which suggests that both bodies were only partially decomposed at the time of deposition in the lower chamber. This further suggests that they died very close in time to each other, either at the same time, or hours, days or weeks apart.

How old is the child?

The juvenile is around 10 – 13 years old in human developmental terms. He was probably a bit younger in actual age (perhaps as young as eight or nine or so) as he is likely to have matured faster than humans. The age estimate is based on modern human standards by which the eruption stages of the teeth are evaluated and the degree of development of the growth centres of the bones.

How old is the female skeleton?

Based on the extreme wear of her teeth, she is probably at least in her late twenties or early thirties.

Did she have children?

It is likely that a female Australopith of her age would have had children.

How do you know the child is a male?

How does this find relate to Lucy?

How do you know that it is a new species?

The team compared the skeletons with all the remains of fossil hominids that have been discovered and in many ways they are absolutely unique from any fossil species found.

Why is this not the genus Homo?

What about Homo habilis?

Our study indicates that Australopithecus sediba may be a better ancestor of Homo erectus and it may certainly help to clear up some of this “muddle in the middle”.

Why is there still rock attached to the child’s skull?

Due to the fragility of the base of the cranium of the specimen and to preserve part of the adhering matrix for future research, the team has decided to leave the specimen partially in rock. The team has been able to visualise this hidden part using scanning technology.