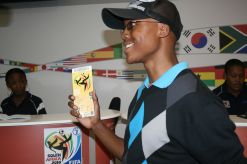 Ernest Maduna, in his early 20s, spent the night outside Maponya Mall in Soweto, just to be part of history – to be in the stadium at 2010 Fifa World Cup matches in his home country.

From Carltonville, about 75km west of Johannesburg’s city centre, Maduna knew scores of football fans from Johannesburg and beyond would descend on the mall, home to one of the Fifa Ticketing centres, when over-the counter sales opened at 9am on 15 April. So he decided to get there the day before, to beat the queues.

“I came here yesterday,” he said, three tickets clutched in his hand. “I slept out in the cold.”

The 11 Fifa Ticketing centres, in the nine host cities, make it easier for fans to get their hands on tickets, as they can be bought directly over the counter instead of via complicated application forms. The 600 First National Bank (FNB) branches used for applications are also open.

The Fifa centres, as well as Shoprite and Checkers retail stores, are also collection points for tickets purchased from FNB, the Fifa call centre and on the Fifa website.

Maduna had wanted tickets for a Bafana Bafana match, but settled for three for the Ghana versus Germany game, a Group D match to be played at Soccer City in Johannesburg on 23 June.

“I wanted tickets for Bafana Bafana. But they got sold out,” he said. But that didn’t dampen his spirits. Approached by an international journalist, he flourished his tickets and said: “I am happy. This is what I came here for.”

Maduna got his tickets just after noon, an indication of the scores of people who also spent the night in the queue, ahead of him.

“When I arrived here at 6am there were already about 400 people waiting for us to open,” said Richard Lalla, a Maponya Mall ticketing centre manager.

Enjoying the tournament with friends

Youssef Moola, a medical student at the University of the Witwatersrand (Wits), also spent the night in the queue, arriving at 5pm the previous day. His friends, Saad Khan and Abdullah Ismail, joined him later.

Between them they bought more than 50 tickets between the three of them. Mohammed Manga, another friend and also a medical student at Wits, said the tickets would be distributed among the group of friends and family members.

They were able to get 10 tickets for the final match, to be played in Soccer City on 11 July. “It was a long wait, but it’s worth it,” said Moola.

Manga didn’t spare praise for Moola’s overnight vigil. “He made history,” he said. “He’s the main man, the mastermind behind the plan to get tickets.”

For Manga, and the thousands of other South Africans snapping up tickets, it’s all about supporting a spectacle to be played in Africa for the first time since its inception in 1930. “It’s coming to my country,” Manga said. “I have to support it; I have to be there.”

Charlotte Brown, from Soweto’s Eldorado Park township, brought a camping chair to the snaking queue. With a large South African flag draped over her shoulders, she moved her chair bit by bit as the queue slowly proceeded.

She knew tickets would be sold out for the matches she really wanted, for the opening match between South Africa and Mexico on 11 June, or any Bafana group match. So Brown went for tickets to Brazil versus Côte d’Ivoire, a Group G match on 6 June in Soccer City. The match, she said, was “my son’s favourite”.

Brown, who was hoping to get about 20 tickets, said she was only buying tickets for matches to be played in Johannesburg’s Ellis Park and Soccer City stadiums. “The stadiums are convenient, they are closer to us.”

‘The turnout was brilliant’

All the ticket centres and FNB branches across the country had massive turnout. The country was abuzz with news of scores of people queuing up for tickets as from the evening of 14 April.

About 53 000 tickets were sold countrywide within eight hours of the first day. A total of 23 matches, including the opening game, the final and the two semi-finals are sold out, said Fifa.

The huge volume of ticket sales eventually crashed FNB’s computer system, but service was restored by about 2.50pm. The bank, which operates between 9am and 4pm, extended its working hours to 5pm.

“Ninety per cent of the ticket requests were done at the 600 FNB branches and we appreciate their work and cooperation even when under enormous pressure,” Horst R Schmidt, chair of the Fifa Ticketing Sub-Committee, said in a statement.

Ticketing centres and all the other sales channels will be open throughout the tournament.