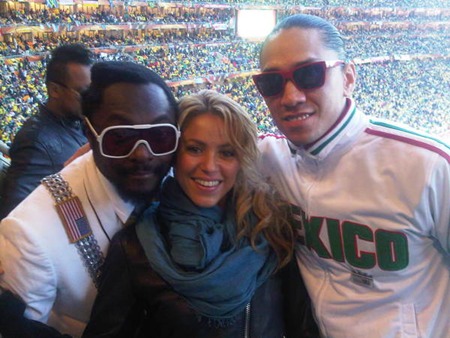 In the past week South Africa’s been inundated with international celebrities flying in from all over the world. Some even flying themselves in – like actor/pilot John Travolta and his wife, actress Kelly Preston, who jetted in on his own Qantas aeroplane.

Travolta was actually in SA to support Australia’s team, the Socceroos – although even his support didn’t help them against Germany who defeated them 4 – 0. Travolta is a Qantas Goodwill Ambassador.

British supermodel Naomi Campbell was also seen at a few games. Earlier in the month she was in Paris to help launch the travel case especially  made by Louis Vuitton to carry the solid 18-carat gold FIFA World Cup Trophy to South Africa. (Don’t worry – she only posed with a replica.)
And then there were all the stars who performed at the World Cup Kickoff Concert, including Shakira who tweeted this pic of herself, saying: “Here I am at the opening match with the Peas.” 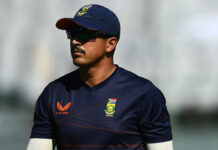