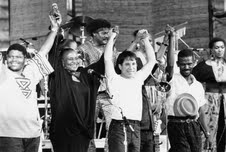 If you remember Paul Simon’s epic album Graceland (a whopping 25 years ago!), then you’re going to love his new documentary “Paul Simon: Under African Skies” which celebrates this special anniversary. The 102-minute documentary sees Paul Simon reminisce and return to South Africa for a reunion concert. (Scroll down to view the trailer.) The 102-minute documentary – “Paul Simon: Under African Skies” –  has been well received at a string of Film Festivals, including the 2012 Sundance Film Festival where it premiered.

The following synopsis of the documentary appears on Paul Simon’s website:

Paul Simon’s historic Graceland album sold millions of copies and united cultures, yet divided world opinion on the boundaries of art, politics, and commerce. On the occasion of the twenty-fifth anniversary of Graceland’srelease, Simon returns to South Africa for a reunion concert that unearths the turbulent birth of the album. Despite its huge success as a popular fusion of American and African musical styles, Graceland spawned intense political crossfire. Simon was accused of breaking the United Nations’ cultural boycott of South Africa, which was designed to end apartheid.

Renowned filmmaker Joe Berlinger brilliantly intertwines both sides of a complex story as Simon revisits old ghosts and gains insights on his own musical journey. With the compelling perceptions of antiapartheid activists and music legends such as Quincy Jones, Harry Belafonte, Paul McCartney, and David Byrne, Under African Skies is both a buoyant chronicle of unparalleled artistic achievement and a profound rumination on the role of the artist in society.

To celebrate the 25-year-anniversary of this unforgettable album, a Graceland commemorative edition deluxe collector’s box set as well as a special two-disc set will also be released, each featuring the original album with bonus tracks and the director’s cut of “Under African Skies.”