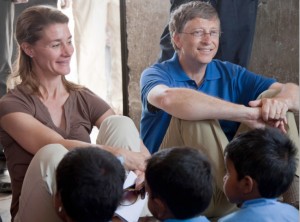 Philanthropist and Microsoft co-founder Bill Gates – and his wife Melinda – have attempted to debunk three myths that they believe block progress for the poor. The couple tackled these myths in their annual Gates Foundation newsletter which was published last week.

For those who haven’t seen the letter…or who simply don’t have the time to read it all, here’s our Lazy Reader’s Guide to the Gates’ Very Important Letter (important particularly for its references to Africa):

Firstly, these are the three Myths:

And here, in a nutshell – according to Mr and Mrs Gates, and based on their knowledge and experience since forming the Gates Foundation 14 years ago – is why those myths are unfounded:

The fact is, incomes and other measures of human welfare are rising almost everywhere, including in Africa.
– Bill Gates

If getting enough to eat, going to school, and living longer are measures of a good life, then life is definitely getting better [in Africa]. These improvements are not the end of the story; they’re the foundation for more progress.
– Bill Gates

When I was born, most countries in the world were poor. In the next two decades, desperately poor countries will become the exception rather than the rule,” he says. “Billions of people will have been lifted out of extreme poverty. The idea that this will happen within my lifetime is simply amazing to me.
– Bill Gates

MYTH: Foreign Aid is a Waste

Health aid is a phenomenal investment. When I look at how many fewer children are dying than 30 years ago, and how many people are living longer and healthier lives, I get quite optimistic about the future.
– Bill Gates

“It makes sense that people are concerned about whether the planet can continue to sustain the human race, especially in the age of climate change. But this kind of thinking has gotten the world into a lot of trouble. Anxiety about the size of the world population has a dangerous tendency to override concern for the human beings who make up that population.”
– Melinda Gates

We make the future sustainable when we invest in the poor, not when we insist on their suffering.
– Melinda Gates

And the last word…from Bill Gates:

“We hope you will help get the word out on all these myths. Help your friends put the bad news in context. Tell political leaders that you care about saving lives and that you support foreign aid. If you’re looking to donate a few dollars, you should know that organizations working in health and development offer a phenomenal return on your money. The next time you’re in an online forum and someone claims that saving children causes overpopulation, you can explain the facts. You can help bring about a new global belief that every life has equal value.”

(*meaning that almost no country will be as poor as any of the 35 countries that the World Bank classifies as low-income today).