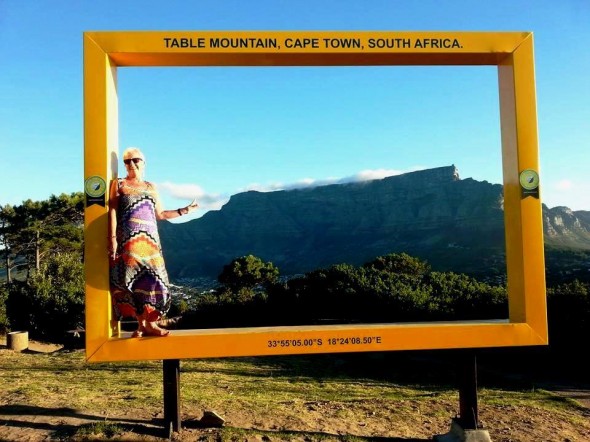 Tourists (and locals) in Cape Town are loving the city’s new initiative – giant yellow picture frames set up in gorgeous locations around the city so that visitors can photograph themselves from well-known and unusual views with Table Mountain as a backdrop.

The Table Mountain Frames Project includes the erection of seven frames, produced by South African artist Porky Hefer as part of the Table Mountain New7Wonder of Nature legacy project, and the interactive artwork is listed as an official World Design Capital (WDC) 2014 site.

The frames are painted in the WDC yellow (which some have pointed out bear a resemblance to the National Geographic yellow). They’re placed in strategic locations around Cape Town which perfectly frame the city’s famous mountain.

So far the frames have been installed at the  V&A Waterfront, Signal Hill, Eden on the Bay, and most recently – on June 11 – at Lookout Hill in Khayelitsha (which locals are encouraged to visit!). Lookout Hill is one of Cape Town’s hidden treasures in the heart of Khayelitsha (which means ‘new home’), and the frame will create a new attraction in the community.

Lookout Hill provides the best vantage point to realise the actual size of  Khayelitsha, and overlook the varoius parts of the township and spectacular views up to the ocean.

“We are delighted that Khayelitsha has been included as part of this WDC 2014 project. We encourage tour operators to include this newest attraction in their itineraries. Tourism in our historical communities is a valuable industry to local entrepreneurs, and we urge locals and visitors to support the small businesses within communities to help create much needed jobs,” said the City’s Mayoral Committee Member for Tourism, Events and Marketing, Councillor Garreth Bloor.

Constructed in 2004, Lookout Hill is a tourism facility that houses a function hall, restaurant, and arts and crafts stalls – attracting a number of tourists. The frame is installed on the 164-step high viewing deck, providing 360-degree views across the Cape Flats.

“Our communities tend to rely on mainly international tourists for support;  we urge Capetonians to do something different by exploring what their own city has to offer. Hop on a tour bus and experience the rich cultural diversity of our city. The view from Lookout Hill makes it well worth a visit,” added Councillor Bloor.

Other frames are proposed for the city centre, Robben Island and Blouberg Beach.