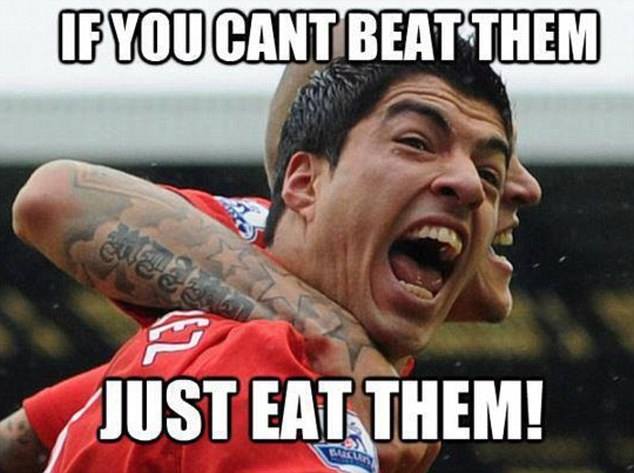 After Luis Suarez appeared to bite an Italian player yesterday during a World Cup match in Brazil, the jokes have been flying on the internet about the controversial antics on ‘Chewsday’, with some saying “the only thing missing from that Italian bite was a glass of Chianti”. UPDATE: FIFA has taken action against Suarez – please see media release below. A South African radio station has even got in on the action with a song parody of Britney Spears “Oops I did It Again” hit. The Uruguay player has apparently done this twice before.

In yesterday’s Uruguay-Italy game, he allegedly took his third bite, sinking his teeth into the shoulder of Italian defender Giorgio Chiellini. According to BBC World a betting firm has had to pay out almost $75,000 to gamblers who had bet on Suarez taking a bite during the World Cup. The firm had offered odds of 175 to 1.

UPDATE 26 June 2014: FIFA has announced that Suarez has been suspended for 9 matches and banned for 4 months from any soccer-related activity.

The FIFA Disciplinary Committee has reached a decision in the case related to Luis Suárez of Uruguay following an incident that occurred during the FIFA World Cup™ match between Italy and Uruguay played on 24 June 2014.

The FIFA Disciplinary Committee has decided that:

· The player Luis Suárez is regarded as having breached art. 48 par. 1 lit. d of the FIFA Disciplinary Code (FDC) (assault), and art. 57 of the FDC (an act of unsporting behaviour towards another player).

· The player Luis Suárez is to be suspended for nine (9) official matches. The first match of this suspension is to be served in the upcoming FIFA World Cup™ fixture between Colombia and Uruguay on 28 June 2014. The remaining match suspensions shall be served in Uruguay’s next FIFA World Cup match(es), as long as the team qualifies, and/or in the representative team’s subsequent official matches in accordance with art. 38 par. 2a) of the FDC.

· The player Luis Suárez is banned from taking part in any kind of football-related activity (administrative, sports or any other) for a period of four (4) months in accordance with art. 22 of the FDC.

The decision was notified to the player and the Uruguayan FA today.

“Such behaviour cannot be tolerated on any football pitch, and in particular not at a FIFA World Cup when the eyes of millions of people are on the stars on the field. The Disciplinary Committee took into account all the factors of the case and the degree of Mr Suárez’s guilt in accordance with the relevant provisions of the Code. The decision comes into force as soon it is communicated,” said Claudio Sulser, chairman of the FIFA Disciplinary Committee.

Below are some of the many jokes being circulated on Facebook: