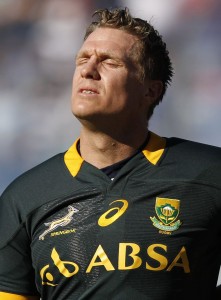 Springbok captain Jean de Villiers will become the fifth Springbok to play 100 Tests for South Africa when he steps onto the field in Wellington, New Zealand later today (Saturday 13 September 2014) to take on the All Blacks.

He told South Africa Rugby this week that while reaching this milestone is a “huge honour” and he’s very “humbled” by all the support, “I can honestly say that I almost would’ve preferred if this was only a regular Test. We’ve got a massive challenge this weekend and the belief is there that we can win – we’ve got to put that into action on Saturday.”

In the interview he paid tribute to the massive support he’s received from his family and his wife Marlie, saying “she’s been a rock and if you think playing 100 Tests is tough, you’ve not spent months on your own raising two beautiful daughters while your husband flies around the world playing rugby!”

Everything you need to know (or maybe know already) about Jean de Villiers:

It should be exciting – no team has beaten the All Blacks as many times as the South Africans. The Springboks have won 34 times and New Zealand 50 times. Let’s make that 35!

UPDATE SATURDAY AFTERNOON: It was a tense, awesome game…which was won by the All Blacks 14-10. Congratulations.