Property group Mantis Collection is hooking up with one of Cape Town’s most visited tourist destinations, The Cape Wheel, and conservation organisation Wilderness Foundation to help save the rhino.

A brainchild of Mantis Collection owner Adrian Gardiner, the campaign will see R5 of every adult and family entry ticket to The Cape Wheel sold go to the Wilderness Foundation’s Forever Wild Conservation Programme. Developed and implemented in 2011, the programme seeks to garner support from individuals and corporate entities to help fight against rhino poaching in South Africa and save endangered animals from extinction.

A passion for wildlife conservation

Gardiner says he has a long-standing relationship with The Cape Wheel and Brisbane Wheel managing director John Elliott and the two share the same passion ï¿½ wildlife conservation.

ï¿½I worked with John Elliott, Managing Director of the Cape Wheel and Brisbane Wheel, when the Cape Wheel was first erected in the Waterfront and because of his passion for wildlife and his respect for Mantis, we have been able to synergize our efforts in supporting this worthy cause,ï¿½ Gardiner says.

Reiterating Gardiner’s statement on the importance of the partnership, Elliot says the main goal is to make a real impact and difference through the programme.This is a very important initiative for the Cape Wheel and our customers. We are proud of this very significant partnership and what we will achieve together he says.

CEO of the Wilderness Foundation, Andrew Muir, says the partnership with Mantis Collection and The Cape Wheel is of vital importance for the success of the fight against rhino poaching.

We cannot be successful with our various projects on our own. We rely on support and collaboration from our strategic partners to ensure that we can protect and sustain all life on earth for current and future generations. The Wilderness Foundation has an established partnership with the Mantis Collection and we are delighted that they are also partnering with the Cape Wheel towards this cause. We are committed to ensuring that all funds raised are utilized in the most effective manner.

Rhino poaching is mainly driven by the illegal trade in rhino horn and the current poaching crisis is attributed to the growing demand for the rhino horn in some Asian countries. The high price fetched for the horn ï¿½ which is believed to have medicinal properties ï¿½ has attracted the involvement of ruthless criminal syndicates who use high-tech equipment to track down and kill the rhinos.

The most affected rhino subspecies by poaching is the black rhino. Large-scale poaching of the now critically endangered black rhino resulted in a dramatic 96% decline from 65 000 animals in 1970 to just 2 300 in 1993. However, through effective conservation programmes across Africa, the black rhino population has risen since the early 1990s to a current population of well over 5 000.

An excellent rhino conservation success story is that of the southern white rhino. With only 50 left in the wild in the early 1900s, the population of this subspecies has grown to over 20 000 resultantly becoming the most populous of all the rhino species.

According to conservationists, rhino poaching is reaching a crisis point and if the wanton killing continues, rhino deaths will overtake births in 2016-2018, meaning rhinos could go extinct in the very near future.

However, the fight against poachers is bearing fruit albeit slowly. The number of rhino poachers arrested during 2013 in South Africa increased considerably with 343 being arrested, 133 of them in the Kruger National Park. In 2012, 267 alleged poachers were arrested. 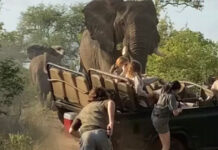