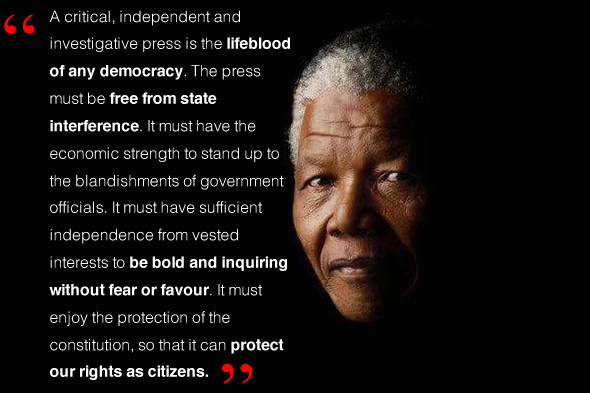 This morning began with a message from renowned South African writer Max du Preez on his Facebook page declaring he has “ended my association with the Independent Media Group and will no longer write a weekly column for its newspapers.” (Read the full transcription below.) In response to this and other recent media events, Gauteng businessman and passionate South African Tshepo Motsitsi has penned the following piece…

It was Nelson Mandela who said, “A critical, independent and investigative press is the lifeblood of any democracy. The press must be free from state interference. It must have the economic strength to stand up to the blandishments of government officials. It must have sufficient independence from vested interests to be bold and inquiring without fear or favour. It must enjoy the protection of the constitution, so that it can protect our rights as citizens.” As I watch the current ANC leadership carry out a sustained attack on media freedom I can’t help but be saddened by how the ANC has departed from the ideals espoused by our beloved Madiba.

Sekunjalo and the Casualties…

In August 2013 Sekunjalo, a company headed by Iqbal Surve bought Independent News and Media group, with a substantial chunk of the funding provided by a government agency.

Survé was formerly known as the “Struggle Doctor” as a result of his providing medical care to prominent South Africans after their release from Robben Island. Surve has maintained close ties to those who inhabit the corridors of power and leverages these relationships to benefit Sekunjalo as evidenced by Sekunjalo being awarded a tender that the Public Protector described as “reckless dealing with state money and services, resulting in fruitless and wasteful expenditure…”

Since the acquisition of Independent Newspapers by Sekunjalo 23 senior journalists, including five editors, were either fired or resigned. The first casualty was Cape Times editor Alide Dasnois dismissed for publishing the Public Protector’s findings regarding the above mentioned tender.

And this morning I read with dismay that respected journalist Max du Preez has terminated his relationship with Independent Newspapers in a rare but commendable act of integrity and speaking truth to power.

In December du Preez penned a hard hitting article about the damage Jacob Zuma is wreaking on South Africa. The Presidency, as is the norm, objected screaming factual inaccuracy. Max du Preez provided Independent Newspapers with facts to substantiate what was contained in his column. But Independent Newspapers ignored this evidence and kowtowing to their new masters issued an apology anyway.

It was whilst attempting to digest this news that I then learn that Allister Sparks a veteran journalist and former editor of the renowned and respected Rand Daily Mail was himself “a subject of Survé’s latest purge of contributors,” his column “having earlier been dumped from The Mercury in Durban.”

In his column on netwerk24 Allister Sparks hits the nail on the head when he describes Surve’s and the ANC’s assault on media freedom thus, “A more cunning way is to buy the publishing house or broadcasting station, then gradually weed out all journalists of talent and independence of mind. Do that to enough of them and those who remain will be intimidated into following the line – or what they think is the line – that the new proprietor wants.”

Boycott Fatigue and a Pinch of Salt…

My initial feeling was to scream “boycott Independent Newspapers” but then I remind myself that too many South Africans are apathetic and far too many have participated in fruitless boycotts and are yet to recover from boycott fatigue.

The next option I am faced with is to warn my compatriots that when it comes to Independent Newspapers’ coverage of the ANC and government take everything with a pinch of salt. Just as is the case with the SABC, editorial independence at Independent Newspapers is a casualty of political expediency and patronage.

To add the cherry on top, Independent’s Executive Editor Karima Brown attended the ANC birthday celebrations this past weekend dressed in ANC colours. In effect nailing her colours to the mast.

I have ended my association with the Independent Media Group and will no longer write a weekly column for its newspapers.

This is the letter I sent them yesterday:

I’m sure you have noticed that I have been feeling increasingly uncomfortable about my association with the Independent Media group through my weekly column in three of your titles.

I have written about what has been happening at your group since the takeover by Sekunjalo on more than one occasion, especially after the infamous axing of Alide Desnois as editor of the Cape Times, and have been in debate with some of your senior colleagues on social media.

You probably also know about my private letters to the editor of the Cape Times, Gasant Abarder, when it became known that veteran journalist Tony Weaver was charged with “disrespecting the authority” of his seniors.

Your decision to accuse me (you called me a “seasoned journalist” in your statement) of factual inaccuracies in my column on President Jacob Zuma and to apologise to him came as a shock – especially since I gave you a full explanation of what I was referring to beforehand.

You did not even have the decency to send me your apology in advance or to inform me that it was going to be published. I thought my explanation would have convinced you that an apology in this matter would have been a travesty.

All readers interested in this matter now know that there was no inaccuracy in my column. The question is: did a judge call the relationship between Zuma a corrupt one? The answer is: yes. In fact, that judge was backed by four others on the bench of the SCA using their own words, not those of Judge Squires.

You knew this when you went ahead and apologized anyway to please the presidency and the party he leads.

And yet I read in Die Burger this morning that Abarder said that Independent Media stood by its apology. Breathtaking. Abarder did not even have the guts to publish my version of events, he merely recorded that I distanced myself from the apology.

My unease grew even more when I saw that you and your colleague, Vukani Mde, had donned ANC clothing when you attended the ANC’s birthday party on the weekend. When I read your and Mde’s arguments about your political allegiance and your attacks on those who thought this was outrageous behaviour for any journalist, I thought I must be living in a parallel universe.

I suddenly understood why you were swayed to knowingly publish a false “correction” and apologise to the president of the party you have pledged allegiance to on the basis of that falsehood.

It appears to me as if your political party’s interests now weigh more heavily with you than ethical journalism.

I became a journalist as a very young person in 1974 when I joined first Die Burger and then Beeld. When I started doing political reporting, I quickly became disillusioned with those newspapers’ support for the National Party and apartheid oppression.

I decided to abandon what was clearly a promising career at Naspers and joined the then Times Media Group. I had running battles with several editors and decided to leave when I joined Van Zyl Slabbert’s initiative to talk to the ANC in exile in Dakar in 1987, again abandoning a promising career.

In 1988 I started Vrye Weekblad. Our stated objective was to expose the evils of apartheid and to let the voices of the majority and of the liberation movement be heard in the Afrikaans community. In the process I not only completely bankrupted myself, but I picked up five criminal convictions, inter alia for quoting banned ANC leaders and furthering the aims of a banned organisation, and escaped an assassination attempt and an office bombing.

When Vrye Weekblad was closed down in 1994, I joined the SABC where you and I were colleagues. Six years later I was unceremoniously fired because I insisted on professional and independent journalism.

The SABC bosses (all since departed under various clouds of suspicion) told the media I was fired because I didn’t respect the senior leadership at the broadcaster. I could not deny that charge.

I am there again. I’m writing a column for a group with leadership that I no longer respect.

I feel tainted by my association with the Independent Media group. It is time to depart once again.

I will betray my own past if I don’t.

I will no longer be writing a column for your group.

A last thought. You, Karima, have on several occasions declared that those criticising your group’s decision-making are simply against transformation. You consistently dismiss those asking questions of those in power as “liberals” or “neo-liberals”.

The transformation the media in South Africa needs is not a replacement of critical voices with loyal ANC cadres. The transformation we need is for the media to fight harder for a clean and accountable government; to hold up a mirror to our entire society rather than just to the urban elite; to champion the cause of the marginalised rather than comfort the already comfortable.