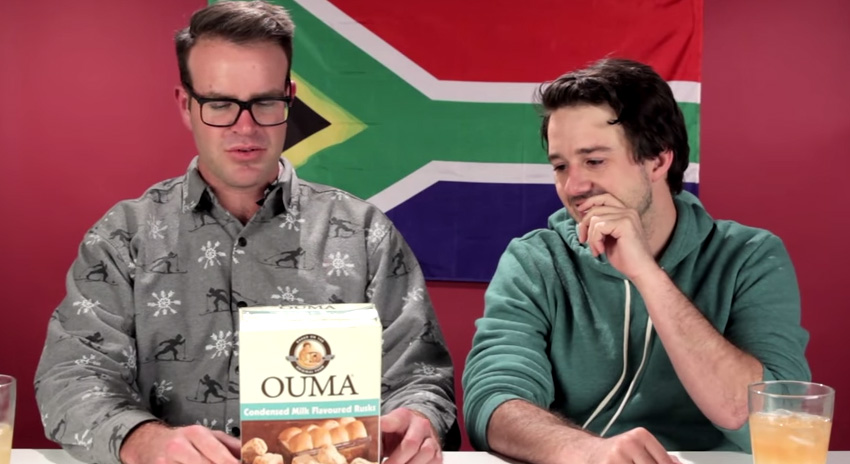 There’s a certain delight South Africans abroad take in sharing their SA treats with foreigners. Their faces. Their reactions! If you’ve never seen it – this is priceless. Check out four Americans trying out South African food for the very first time… By the end of the video, which was compiled by BuzzFeed, their responses ranged from “every single South African food is amazing” to “I feel like everything we ate was something you’d eat when you’re exceptionally drunk”!

Here are some of the Americans’ reactions to a selection of our South African treats: “Refreshing just to look at it.”
“It’s like drinking a soft gust of air.” “Looks like cool bacon.”
“Looks like stained glass of meat.”
“It’s like you set up to make some jerky but after a day you get impatient and go ‘yeah it’s good enough’.” “So they’re only girl anchovies?”
“Noooo, why?”
“It smells like what they would feed penguins.”
“I like that.”
“When do they eat this? When children have been naughty?”
“So we definitely just ate some dolphins.” “You have to have a bite to eat this. You have to have teeth.”
“I’d like to crumble it over some ice-cream.”
“I feel like I would eat this under circumstance, but if I had a choice I wouldn’t say “get me the Ouma’s”.”

(IMPORTANT FOR ANY FOREIGNERS READING THIS: Someone forgot to tell them to dunk the rusks in their coffee or tea! Try it like that and you’ll LOVE it!) “This looks like what everything we ate…becomes!”
“This is like sausage that your grandpa forgot about.”
“Tree bark exterior, nice moss interior.” “These are even better than the rusks.”
“Straight up dog food.”