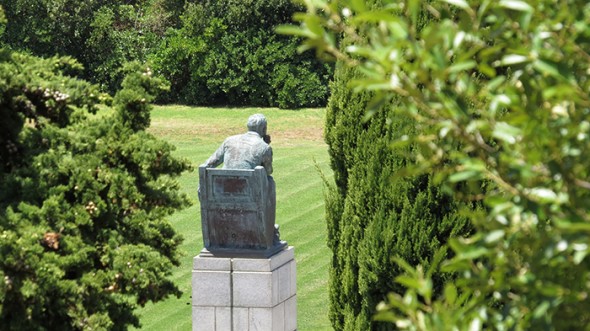 This is not the time for hyperbole. No, there is not a race war coming. No, there will not be wholesale changes to memorials on or off university campuses. No, the country is not about to implode because some UCT students tackled the Rhodes statue. This turmoil will pass.

The reason is simple: the overwhelming majority of South Africans, black and white, believe in a middle path somewhere between reconciliation and social justice. From time to time the scale will dip sharply in one of those two directions, but it will always auto-correct towards the middle because that is the kind of country we are, thanks to the great men and women who gave us the terms of our freedom.

Our repeated mistake is to overreact to the extremists on each side of the political spectrum. They do not represent the heart of this beautiful country. They will spew hate speech to flag down public attention but that is the only weaponry they have.

This is not a country that takes kindly to extremists of any kind; they will remain on the noisy margins. This nation came to birth through peaceful negotiations for a very simple reason — we stared into the abyss and we realised one thing: if this ship goes down, we all go down.

It would help, in these transient moments, to have leadership which speaks to the anxieties of many South Africans as they witness a tyre burning around a statue commemorating those who fought against European fascists in a world war.

But there is a terrifying silence in the storm.

Until now, none of our senior political figures has bought space on prime-time television to take a stand against vandalism and a position on symbolic justice.

I would love to hear a credible leader say clearly that other people‘s memories also matter and that nation-building means recognising that Paul Kruger carries emotive memory for many South Africans.

Where is the leader who can take all of us along with her towards an understanding that the questioning of statues is a matter of national significance?

How I wish for a leader who can temper extremist sentiment even as he speaks to the very real issue of transformation of cities and campuses. I long for a leader who knows that arresting vandals or making school history compulsory solves nothing; here is a teachable moment, an opportunity for a sustained, national dialogue as well as action on signs, symbols and statues in our still unsteady democracy.

The problem is not what to do in a crisis; it is what you do in peacetime — that is, between crises. I was delighted by the decisive statement from the UCT senate on the Rhodes statue — but why only now? What were those distinguished academics doing since 1994 or even before that? Was this late decision based on principle or pressure? If we make decisions about transformation only under duress, we invite the cycle of protest-accommodation-protest to continue with an enduring suspicion among students about the leadership of the academy. How the Rhodes University senate must be kicking itself for roundly defeating a proposal from Professor Roger Southall in 1994 to rename that venerable institution at a time when such a courageous move would have meant so much for campus, city and country.

In universities and in cities, we cannot afford to be smug. As the poorest among our citizens continue to feel left out from any post-apartheid dividend, subjects of scorn will multiply — foreign nationals, monuments, street traders — and the tactics of the opportunists will horrify. And in a country where common vandalism has become indistinguishable from legitimate protest, great damage is done to the unfinished project of nation-building, and the necessary quest for justice might be further postponed.

Underlying all of this upheaval remains the failure of education — such as the inability among the protesters to distinguish an anti-fascist memorial from an imperial monument, or a Boer War general from a colonial capitalist. This is the danger we constantly court when political activism is unhinged from even a superficial knowledge of our complex and entangled histories.

Still, our biggest mistake might yet be that we think these passing protests in cities and on campuses are about statues.

This article first appeared in The Times and is republished here with the kind permission of Prof Jonathan Jansen.

Jonathan Jansen is Vice Chancellor and Rector of the University of the Free State and President of the South African Institute of Race Relations. He holds a PhD from Stanford University, the MS degree from Cornell University, and honorary doctorates of education from the University of Edinburgh (Scotland), Cleveland State University (USA), and the University of Vermont (USA, 2014). He is a Fellow of the American Educational Research Association and a Fellow of the Academy of Science of the Developing World. His book Knowledge in the Blood: Confronting Race and the Apartheid Past (Stanford 2009) was listed as one of the best books of that year by the American Libraries Association. His new book, Schools that Work, uses video-documentaries to capture what happens inside disadvantaged schools which nevertheless produce the best results in physical science and mathematics in South Africa. He also writes popular books like Great South African Teachers (with two students), We need to talk, and We need to act (2013); and is a columnist for The Times and Die Burger. In 2013 he was awarded the Education Africa Lifetime Achiever Award in New York and the Spendlove Award from the University of California for his contributions to tolerance, democracy and human rights. In May 2014 he received an honorary doctor of letters degree at the University of Vermont and recently Knowledge in the Blood also won the Nayef Al Rodhan Prize, the largest award from the British Academy for the Social Science and Humanities, for its contribution to scholarly excellence and transcultural understanding.