More than four years ago, Joost was tragically diagnosed with motor neurone disease (MND) and given between two and five years to live. Since then he has inspired South Africa with his sunny disposition and unwavering commitment to South Africa and rugby.

“I want to congratulate everyone for being picked for the World Cup team to represent South Africa. Whatever you do, go and enjoy yourself. Go and express yourself.

“Do not worry at all what people are going to think or say about you or your team. Because that will influence your actions, your habits, your character and your destiny.

“Go out and show your conference on attack and your commitment to defence. Make yourself, your family, your country and God proud. May God bless you all. Bring back the Cup to where it belongs.” 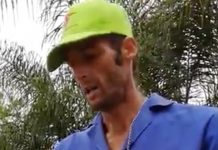