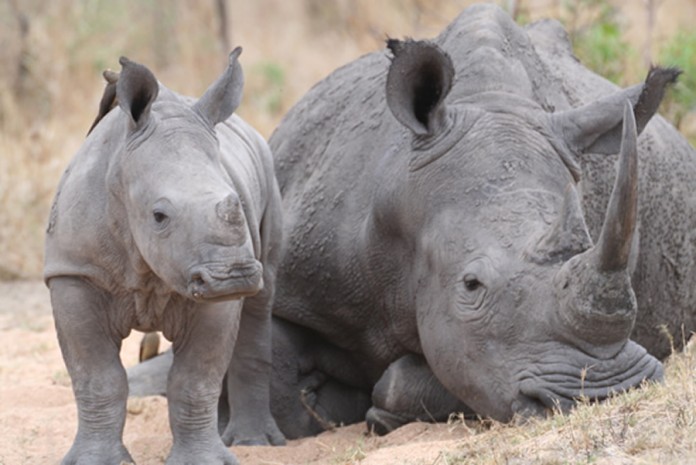 The murder of a British pilot, Roger Gower, shot down by elephant poachers near the Serengeti National Park in Tanzania on January 28, highlighted the scale of the threat posed by armed crews of poachers. Tanzania’s elephant population has crashed from 109,000 to 40,000 in the past seven years.

The threat to the African rhinoceros is even more dire. Between 2007 and 2013, the poaching of rhinos in southern Africa grew by 7,000 percent, from 13 animals killed in 2007 to 1,004 in 2013. These numbers are understated, because not all carcasses are found in the wild.

Demand for rhino horn is driving the African rhino to the brink of extinction. But Australia may be in a unique position to offer an unusual form of assistance.

We are used to seeing population growth and economic growth described as progress, but progress is on a monstrous and pointless collision course with nature in Africa. The massacre of rhinos and elephants is reaching an industrial scale, apart from the enduring problem of encroachment by human activity.

In South Africa alone, more than 4,000 rhino have been poached since 2010. At this rate, the southern white rhino population faces extinction in the wild in about 10 years.

Organised gangs operating from neighbouring Mozambique are killing rhinos at a rate of three rhinos a day.

Given that it takes three years for a female rhino to produce a calf, the kill rate has reached the tipping point of being greater than the birth rate.

All because of human greed, because rhino horns are made of keratin, the same material that makes fingernails and do not have the magical medicinal qualities claimed for them. Yet the retail value of a kilo of rhino horn in China or Vietnam is AUD $100,000, and with a horn of approximately 5kgs being standard, the black market value of that horn can reach half a million Australian dollars and more.

Anyone who has been on safari in Africa knows it is one of the great experiences of life, so can Australians do anything about the problem?

One person decided Australia, as a nation, could do something because it is the ideal place to provide a strategic safety net for the rhino population.

His name is Ray Dearlove. He decided he wanted to rescue endangered rhinos from southern Africa, ship them to Australia, and set up a breeding population in this country as a biological insurance policy in the event the rhino population crashed.

“The mission was to fly 80 African rhinos to Australia, over a period of four years, to establish an insurance population and ensure the survival of the species,” Dearlove told me. He is 67, and retired from work to spend the past three years full-time on what became the Australian Rhino Project.

When Dearlove first went to see government bureaucrats in Canberra in 2013, he was told the success of his project was unlikely, given the biosecurity challenge, and the logistical, financial, health and administrative problems. They said it would take years to even get approval to proceed.

In the interests of your mental health I will now skip three years of excruciating negotiations, in two countries, and fast-forward to where Dearlove has progressed.

He has gained the support of the Australian and South African governments. The project has been given tax-deductible status. He has raised funds from a band of generous private donors. He has sourced his first shipment of six young white rhinos from private game parks in South Africa. He has received permission to quarantine the rhinos at the Taronga Western Plains Safari Park in Dubbo. He has gained the support of Monarto Zoo in South Australia, which has space and expertise for rhinos, to create a home for his rhinos.

He now expects to fly the first shipment of rhinos to Australia this year, travelling by air because a sea journey would be too long and stressful. It will cost about $100,000 per rhino to ship. He hopes to receive the approval to move the rhinos into quarantine in South Africa by April.

This is a remarkable journey. It is a journey by a man who emigrated to Australia from South Africa 30 years ago and is now seeking to help both countries. The rhinos shipped to Australia would remain the property of the South African government.

There are now two governments invested in the Australian Rhino Project, and willing to provide the biosecurity screening on either side of the 11,000 kilometre journey.

In December, 2014, Barnaby Joyce, the Minister for Agriculture, now Deputy Prime Minister and leader of the National Party, wrote to Dearlove to express his support. His department wrote to their counterparts in South Africa with a detailed set of questions about the biosecurity of the project.

The Minister for the Environment, Greg Hunt, has also lent his support. Last year, he wrote to Dearlove: “The department has been well briefed as to the aims, objectives and plans of the project and we are, in principle, fully supportive of these strategies.”

The most renowned conservationist in Africa, Dame Jane Goodall DBE, has also given her support to the project.

Donations to the Australian Rhino Project are tax deductible, which is crucial given the cost of moving animals that each weigh at least 1,500 kilos, or 20 people. A mature male white rhino weighs 2,400 kilos, the bulk of 30 people.

This top-down vindication has shifted the actual shipping of rhinos from a quixotic dream to a project that should become reality this year. With all the biosecurity measures ready to be put in place, an idealistic one-man campaign turned into a two-man project, then added volunteers, then private benefactors, and finally two governments working co-operatively to turn a hope into an international conservation mission.

This article first appeared in the Sydney Morning Herald and is republished here with kind permission of Paul Sheehan.