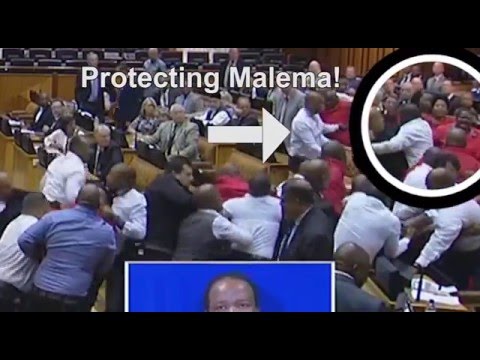 Two of Julius Malema’s bodyguards allegedly managed to sneak into the national assembly with the parliamentary protection service members to remove the EFF Tuesday – in a scuffle that grew violent – according to the Democratic Alliance, who called it a “devious plot” showing the EFF could not be trusted to uphold the rule of law.

DA chief whip John Steenhuisen said the DA had received reports that two of the so-called white shirts who stormed into the chamber when EFF members tried to stop President Jacob Zuma from talking were in fact “Malema’s personal bodyguards posing as members of parliamentary protection services”.

Late on Thursday the DA reportedly provided a video it said proved what it alleged, with the white-shirted man protected Malema, both of them circled in white.

Steenhuisen said, “It is deeply disturbing that parliamentary protection services, which are meant to be highly trained former SAPS members, can be infiltrated by anyone with a white shirt and gym membership.” He referred to the parliamentary officers as “a squad of goons”.

The ANC’s chief whip Jackson Mthembu reportedly also told a news conference on Thursday that Malema’s private security team had entered the parliamentary chamber with the Sergeant-at-Arms during Tuesday’s session. The EFF, meanwhile, said the bodyguards were Zuma’s.

The fight that broke out in Parliament on Tuesday. View it here:

EFF national spokesman Mbuyiseni Ndlozi said in a statement, “We know for a fact that Zuma’s bodyguard formed part of the entourage that came to remove EFF MPs on many occasions. In fact‚ the two men who came to specifically remove the CIC (commander in chief) Julius Malema are not members of the Protection Service‚ but Zuma’s bodyguards.”

Steenhuisen said that parliament is currently investigating these claims and formulating charges against the relevant culprits.

“Close examination of video footage of Tuesday’s sitting shows what appears to be a man in a white shirt rush to Malema’s side during the EFF’s ejection from the NA and fight off other members of Parliament’s protection services, in an effort to protect him.

“If these reports are to be believed, and the aforementioned footage seems to support their claim, it is clear that the EFF went into Tuesday’s sitting with an explicit agenda to disrupt the day’s programme and ‘meet violence with violence’ as the EFF leader stated earlier this week.

“The EFF’s devious plot and destruction of parliamentary infrastructure demonstrated that they are clearly not a party that can be trusted to uphold the rule of law and take the country forward, and deserve South Africa’s condemnation.

“We will write to the Speaker of Parliament, Baleka Mbete, requesting details of Parliament’s investigation, and that the outcome be made public. It is important that we get to truth of this matter to ensure that any guilty culprits will be held accountable for their actions and possible violation(s) of the Powers, Privileges and Immunities of Parliament Act.

“It is deeply disturbing that parliamentary protection services, which are meant to be highly trained former SAPS members, can be infiltrated by anyone with a white shirt and gym membership.

“Distinguishing white shirts during the in-House scuffles that have come to characterise the fifth Parliament is incredibly difficult, and them not having name badges makes holding them accountable for excessive force and other improprieties even more difficult.

“Repeatedly I have requested that the white shirts be provided with a distinct uniform and ID badges. However both the Speaker of Parliament and its Secretary have ignored my requests.

“Perhaps now that their squad of goons may have been infiltrated with relative ease they will take my requests more seriously.”