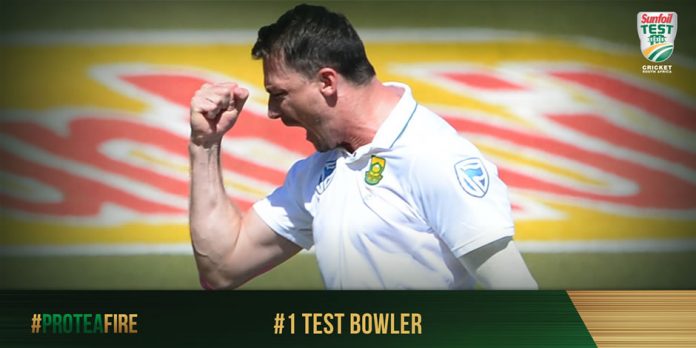 South African cricketer Dale Steyn has stormed back to the number one spot in the ICC (International Cricket Council) Player Rankings for Test Bowlers. In the words of Cricket South Africa (CSA): “HOWZAAAAAT?!” His move to the top spot came after producing a match-winning performance in the Centurion Test that helped South Africa complete a 204-run victory over New Zealand on Tuesday.

Steyn, who grabbed five for 33 in the second innings in what was his 26th five-wicket haul, finished with match figures of eight for 99 to regain the top slot.

No wonder the humble Proteas pace bowler – who describes himself on his Twitter profile as being a “Terrible guitar player” (with no mention of his cricketing accolades) – is called the #SteynRemover!

After reclaiming the number one ranking in February 2014 against Australia at Centurion, the 33-year-old had enjoyed the top spot until a shoulder injury in the Durban Test against England in December 2015 limited his bowling.

India off-spinner Ravichandran Ashwin took advantage of Steyn’s absence and backed up by some strong individual performances, finished the year as the top-ranked bowler.

Steyn has now been number-one for a record 263 Tests with Muralidaran coming second in the list at 214 weeks. In terms of days, Steyn has spent 2,320 days at the top, the most by any bowler since World War II.

Steyn’s compatriot fast bowlers – Vernon Philander and Kagiso Rabada – have also made significant gains in the latest bowlers’ rankings, which were released on Wednesday morning.

Philander, who took four wickets in the Centurion Test, has moved from 13th to 11th position, while Rabada has gained three places to rise to 27th position after grabbing five wickets in the match.

In the ICC Player Rankings for Test Batsmen, South Africa captain Faf du Plessis’s unbeaten century in the first innings has contributed in him moving up the ladder.

Du Plessis scored 112 not out and six in his two innings and has moved up nine places from 33rd rank to 24th rank. Wicketkeeper-batsman Quinton de Kock, who was adjudged player of the match for his knocks of 82 and 50 as well as six dismissals behind the wickets, have seen him move up 18 slots to 32nd rank.

Meanwhile, the 1-0 series win has pushed South Africa up two places to fifth in the ICC Test Team Rankings, while New Zealand has slipped two places to seventh.

South Africa is now on 96 points, while Sri Lanka and New Zealand are at 95 points each. However, Sri Lanka is ranked above the Black Caps in sixth place when the ratings are calculated beyond the decimal point.

A @DaleSteyn62 five-for helps rip through New Zealand on Day 4 for a 204 run victory and 1-0 series win #SAvNZ pic.twitter.com/Fqyz6Ov5VO