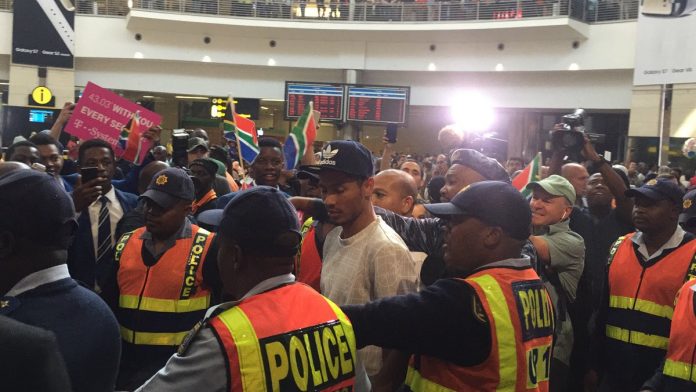 Olympic medallist and 800m world record breaker Wayde van Niekerk has returned home to a modest welcome from fans… and a new Audi.

Odessa Swarts and Elsie Simbine having a chat while waiting for the arrival of their sons at OR Tambo. #IOLYMPICS pic.twitter.com/gfJL2C6ABi

#WaydeVanNiekerk The Olympic champion has arrived and is instantly surrounded by fans. pic.twitter.com/VclqeiN3J5

#WaydevanNiekerk takes delivery of his new sports car after touching down in SA this morning pic.twitter.com/9lhJUSUsAA

#WaydeVanNiekerk Audi SA is also here to hand over a brand new sports car to the Olympic champion. ML pic.twitter.com/ooJ6QEcqMT

#WaydeVanNiekerk A modest number of fans have turned up this morning. Some school pupils are here with some banners. pic.twitter.com/30IiocGXiu

#WaydevanNiekerk back home this morning following his gold medal and world record in the 400m at #RioOlympics2016 pic.twitter.com/zE6PcMFY0F