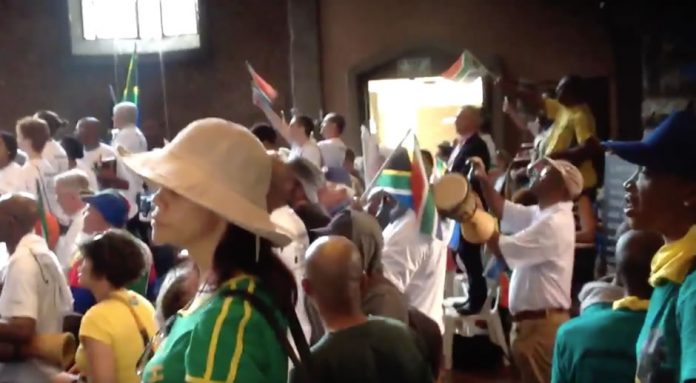 PRETORIA – Tshwane has closed down for the potentially historical marches today to save South Africa, with music in the air and a heavy police presence on the ground.

MH: We will overturn #StateCapture by honest means #SaveSouthAfrica. We will defend everyone who stands up against it. And we will win! pic.twitter.com/9pBqS0DpUR

It included a gathering of several business and political heavyweights such as leaders of COPE, SACP and UDM.

Church Square is alive with the colour of red as the Economic Freedom Fighters (EFF) sing and chant songs which include the words Zuma thupa ya tla (Zuma you’re going to get a beating) and that university fees must be free.

And Democratic Alliance (DA) leader Mmusi Maimane has addressed his supporters saying today will be a memorable day like 27 April 1994 when the first democratic national elections were held, a day he said when South Africans were united.

RETWEET if you support our call to South Africans to take a stand & #ProtectOurConstitution! pic.twitter.com/4JZR9rRBVE

It is a pity, as many have pointed out, that today is not as united as it should be – with the DA, EFF and Save SA campaigns all marching to (and in) Pretoria separately…

If #EFFmarch, #SaveSouthAfrica & #DAmarch all march together it would be very POWERFUL & INFLUENTIAL. This isn't the time to be divided ??✊

But they are marching peacefully and on the same day, all united with one purpose to reclaim the nation, and that is a start!

"'He who builds a firepool, knows that his house will soon catch fire." – African Proverb#SaveSouthAfrica#ProtectOurConstitution

What a day to be alive! Democracy at its height ! #ProtectOurConstitution #StateCapture #SaveSouthAfrica