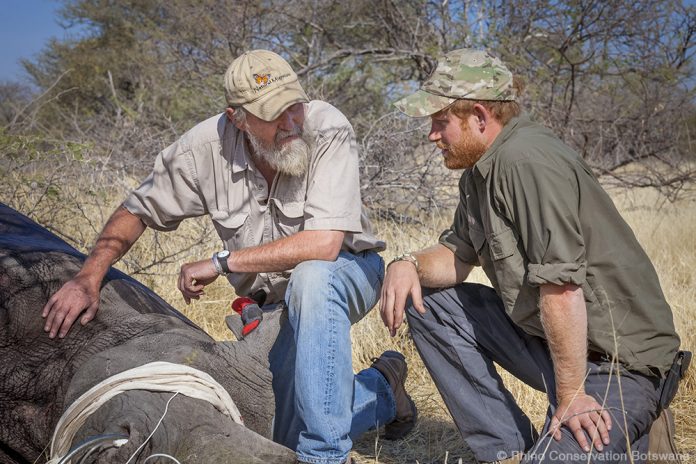 Rhino Conservation Botswana (RCB) announced this week that Prince Harry of Wales has become a Patron of RCB… to help raise awareness of the plight of Africa’s rhino, both black and white, which are being poached to death.

The Prince, who has long held a close relationship with Botswana, and who has spent time in the field alongside anti-poaching teams, will add his voice to that of Botswana’s Honourable Minister Tshekedi Khama to help inspire positive action.

Prince Harry said: “I’ve been lucky enough to visit Botswana for more than 20 years and am incredibly fortunate to be able to call it my second home. Being Patron of RCB is an opportunity to give something back to a country that has given so much to me.“

“It’s about time we start celebrating and supporting the countries that are taking the lead in conservation.”

According to a news release from RCB, Prince Harry visited Botswana last September where he joined RCB Director Map Ives and Kai Collins in the Okavango Delta on a sensitive operation to fit state-of-the-art electronic tracking devices to critically endangered black rhinos.

Ives said this week: “Prince Harry has seen at first-hand the cruel and senseless damage inflicted on these endangered animals by poachers. “I know that His Royal Highness’s support for our work will make a real difference to rhino conservation. We are hugely grateful for the work and support Prince Harry has already extended to RCB, and look forward to working with him in the future as our Patron.”

In a short film released with the announcement (watch below), Prince Harry said whilst in Botswana: “The rhino is one of Africa’s most iconic species. This is a black rhino, an animal that deserves the utmost respect, so to be able to be sitting next to her is incredibly special. The black rhino has been reintroduced into Botswana and its numbers are increasing here, while numbers are decreasing elsewhere. If we can’t save these animals, what can we save?“

RCB is on a mission to monitor and protect black and white rhinos that it helps rescue from poaching hotspots across southern Africa and move to Botswana.

Ives explains: “Across Africa, rhinos are being poached for their horns at a rate that could make them extinct in the wild within 10 years. It’s a senseless trade; rhino horn has no proven medicinal value. Even so, demand is increasing. Today, rhino horn is worth more than gold…

“RCB’s message is one of hope. Together, we can stop rhinos from going extinct and build a safer future for these magnificent animals.”

To donate and give rhinos a future, please visit RCB here:
www.rhinoconservationbotswana.com/donate

Our new patron Prince Harry on rhinos: "The rhino is one of Africa’s most iconic species..If we can’t save these animals, what can we save?" pic.twitter.com/VBibulmVG4

Prince Harry: "Being Patron of RCB is an opportunity to give something back to a country that has given me so much" https://t.co/E16pyo9zIc pic.twitter.com/csaX11koGN