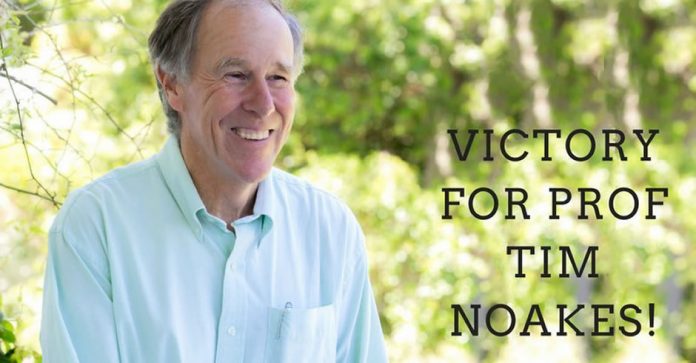 CAPE TOWN – Professor Tim Noakes has been found not guilty of unprofessional conduct on all counts. His foundation – The Noakes Foundation – has issued a press release, but their website has been overwhelmed with hits and has crashed. We will update when it becomes available again.

Noakes had been facing charges of unprofessional conduct, following a ‘baby Banter’ tweet in February 2014… when he advised a Twitter user, Pippa Leenstra, to wean her newborn baby on to a low carbohydrate/high fat (LCHF) diet.

In her tweet to Noakes and his co-author nutritional therapist, Sally-Ann Creed, Leenstra had asked: “@ProfTimNoakes @SalCreed is LCHF eating ok for breastfeeding mums? Worried about all the dairy + cauliflower = wind for babies??”

A complaint about the tweeted advice – from Claire Julsing-Strydom, former president of the Association for Dietetics in South Africa (ADSA) – was later lodged with the Health Professions Council of South Africa (HPCSA); and Noakes – an A-rated professor of exercise and sports science at the University of Cape town – was accused of giving unconventional and unscientific advice, and of unprofessional conduct for dispensing the advice via social media where there was not a traditional doctor-patient relationship. (Julsing-Strydom testified that the advice he gave was medically incorrect and could have been life-threatening.)

The banting guru insisted that a doctor-patient relationship could not exist because he considers himself a scientist and not a doctor. He has not practised as a general practitioner for years, and said he considered that Leenstra had written to him as the author of his book and not as a doctor.

Noakes said: “In my opinion she was writing to the two authors of the book, and how can you be in a doctor-patient relationship when the tweet is to two people, one of whom is not a medical doctor? That does not make sense to me.

“I do not see myself as a doctor. If I had been a doctor and I saw that tweet I would have responded differently. I would have asked her what the problem was, advise on treatment and told her who to go and see. I did not go that route, I went the scientific route and gave my scientific opinion.”

At one point, during a court hearing last year, Noakes broke down in tears, saying: “If I had known what the consequences were of this hearing, I would have done anything in my power to stop this from happening because of the cost to me personally and to my family.”

The trial this week has been no different, with Noakes reportedly breaking down in tears on Wednesday… and today, there was a hugely emotional reaction from both sides to his innocent verdict. According to witnesses, even the doctor who dissented broke down in tears!

Noakes has sold more than a quarter million copies of his book “Real Meal Revolution” promoting the Banting (low-carb, high-fat, or LCHF) diet.