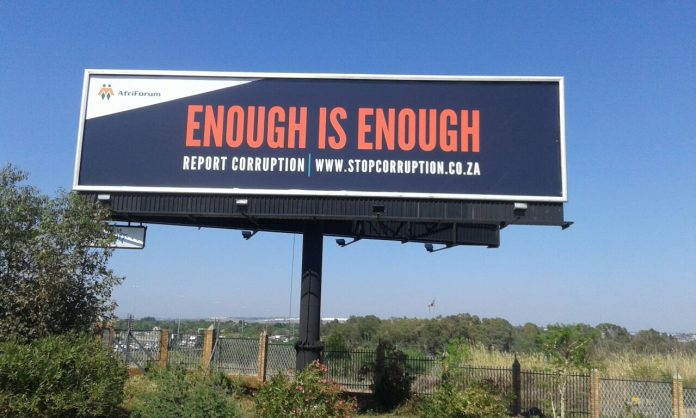 A report has been released today exposing an alleged total accumulated misappropriation of R16 billion by South African national departments during the 2015/2016 fiscal year. The report, by AfriForum, is part of its national whistle-blower campaign.

The national departments of Transport, Water and Sanitation (DWS) and Basic Education are the main perpetrators that are collectively responsible for the misappropriation of nearly R9 billion, according to AfriForum.

This information was among others obtained through the departments’ annual reports, each including a report from the Auditor General (AG).

According to Monique Taute, Head of AfriForum’s Anticorruption Unit, the Department of Transport misappropriated an accumulated amount of R4,23 billion.

“A functional public transport system is of critical importance for the growth and progress of South Africa. It is unacceptable that this department misappropriated more than R4 billion while the lack of proper public transport infrastructure impairs thousands of citizens,” says Taute.

Furthermore, the DWS misappropriated R2,58 billion, while numerous communities do not have access to clean and drinkable water, she said.

“In 2015 more than 25% of households reported regular water supply problems. At times the water supply was off for days on end, which contradicts national legislation.”

“Roughly 80% of South African schools are dysfunctional, mainly due to poor and insufficient infrastructure. The department could have spent the billions of rands that was misappropriated to purchase and distribute urgent supplies such as school desks, chairs, handbooks and workbooks among other things,” says Taute.

AfriForum’s Anticorruption Unit will during the next couple of weeks submit criminal charges in accordance with Section 86(1) of the Public Finance Management Act, 1999 (Act No. 1 of 1999) against the Directors-General of these three national departments.