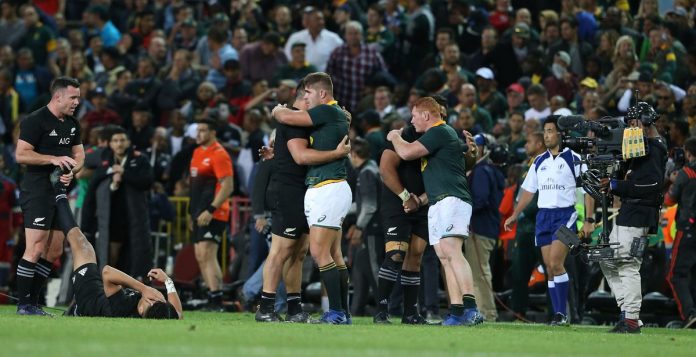 The All Blacks may have won the rugby today in South Africa (by just one point), but the Springboks put on a brilliant performance – totally transforming from their last horrendous encounter with New Zealand, just last month (when they lost 57-0) – to deliver a breathtaking match that paid tribute to the good-hearted rivalry between our two great rugby nations.

Today the Springboks were the Comeback Kids, giving their fans a thrilling final-round match of the 2017 Rugby Championship, and proving that anything is possible.

New Zealand won the 25-24 at Newlands Stadium in Cape Town in a nail-biting game where each took turns being in the lead.

It became New Zealand’s game after Damian McKenzie scored a try at 69 minutes, allowing the All Blacks to create an advantage of 8 points.

South Africa’s Damian de Allende was given the red-card which meant the Boks were down to 14 men, but still they fought back tenaciously and Malcolm Marx scored a try, converted by Elton Jantjies…. and so the Boks ended just one (all-important) point behind the All Blacks.

South African Rugby (SARU) said: “What a game, what a comeback from #Springboks, what a way to end the @CastleLagerSA Rugby Champs. Well done all!”

All Blacks Captain Kieran Read said: “What a game, what a crowd. Awesome to be here at Newlands and we have to give credit to the Springboks I think… It did take 80 minutes plus for us to get over the line and sometimes that’s going to happen. I’m proud of the lads for doing that.”

Springbok Captain Eben Etzebeth said: “The guys were all warriors out there tonight. I’m so proud of them. Thanks so much for the support, it’s definitely not the result we wanted.”

From a defecit of 57 to 1 point in 2 weeks , now that's the transformative power of South Africa #Springboks #SaVNz @SAfmRadio #SABCNews

Early try to the #Springboks as @rosscronje9 dives over the line after sustained pressure by his team. #Springboks take lead again 10-8. pic.twitter.com/iRBwIF0bYJ

I don’t mind losing like that, all we ask for as Bok fans is heart, and that was shone today, great game, BOKKE forever #SSRugby #RSAvNZL