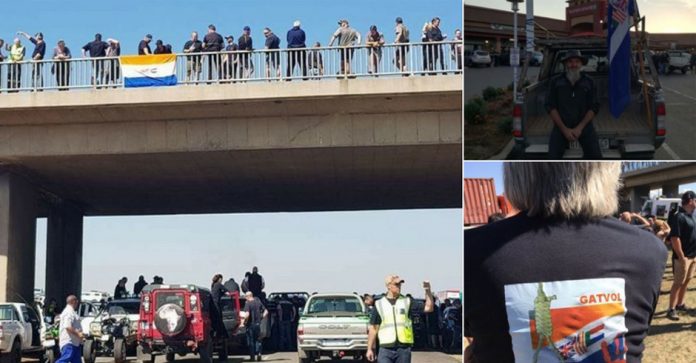 Photos have emerged of some racist South Africans at today’s #BlackMonday events… wearing and waving the old apartheid-era flag. However some of the shocking photos being shared on social media – of a white couple wearing the flag, and of the new flag being burnt – were from years ago, but sadly had the desired negative effect of whoever started sharing them… of casting a shadow over the thousands of South Africans who were united in hope to raise awareness about the unacceptable level of crime against all South Africans, including farmers.

The behaviour, and clear sentiments, of today’s racists, stuck in the past, have been met with disappointment and disgust by most South Africans who were gathered with good intentions, hopeful of getting their government to do something about the escalating murder rate in South Africa – from townships to suburbs to rural villages and farms. 52 South Africans are killed per day.

Instead a handful of racists sabotaged the outcome, and while the ANC did issue a statement, it focused on the “despicable and racist behavior by some”. The ruling party focused on the flag and didn’t mention the farmer who was killed in KwaZulu-Natal today.

The ANC reminded the country that part of the National Development Plan enjoins government and societal partners to create a South Africa where “all people living in South Africa feel safe, have no fear of crime, are properly served by the police and courts”.

The ANC claimed the campaign today focused on white farm owners and ignored the deaths of farm workers. However, judging from the photos and videos displaying solidarity between black and white South Africans on #BlackMonday, the ANC were perhaps the ones who were a little too focused on racial divisions.

The ANC said it calls on the farming community to “appreciate the importance of all lives, not just white lives” and said the dismantling of a racist legacy is necessary. It said action will be taken by government “against all forms of impunity including the promotion of hate speech and the blockade of roads in the name of protest.

“The ANC invites the proponents of #BlackMonday to join, rather than alienate, the majority of South Africans in the fight against all forms of crime against all people in our country.”

DA leader Mmusi Maimane said: “The use of the old SA flag is unacceptable. It is reminiscent of our brutal past and does not belong in the new SA.”

The old photos from the past, including that of the burning of the new flag, were unfortunately shared widely on social media, including by a respected eNCA journalist.

He later tweeted: “These images did not come from today’s march. I have severely erred in sharing them. However, the message remains relevant.”

The use of the old SA flag is unacceptable. It is reminiscent of our brutal past and does not belong in the new SA.

Taxi drivers were swiftly arrested when they blockaded roads last week, but today dololo arrests, we see you. #BlackMonday pic.twitter.com/V945Iw5sxy