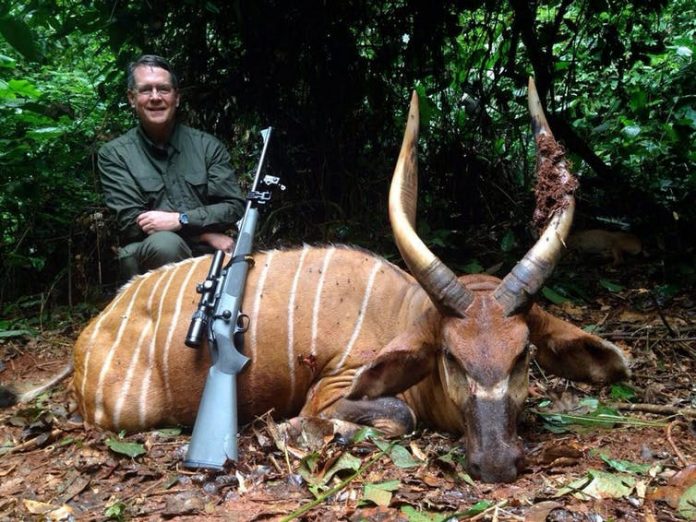 In November 2017 the U.S. Fish and Wildlife Service announced that it was reversing an Obama administration policy barring hunters from importing trophies (body parts) from elephants killed in Zimbabwe and Zambia into the United States. The Trump administration asserted that these countries were successfully protecting elephant herds, and that legal hunting helped African communities earn money and created an incentive to protect elephants.

Environmental groups and conservation scientists sharply criticized the decision, arguing that hunting was not an effective way to promote conservation. Interior Secretary Ryan Zinke, who oversees the Fish and Wildlife Service, is a strong hunting advocate and has taken a number of pro-hunting actions in office. But as protests mounted, on November 17 President Trump put the policy on hold, surprising agency employees. He has since announced he will make a final decision within the week…

Big-game trophy decision will be announced next week but will be very hard pressed to change my mind that this horror show in any way helps conservation of Elephants or any other animal.

Many Americans object to hunting, but their reasons vary. Joshua Duclos, a doctoral candidate in philosophy at Boston University, identifies two central arguments. First, opponents say humans do not need to hunt in order to survive. Second, many observers “find the derivation of pleasure from hunting to be morally repugnant,” especially when they see a hunter smiling over the body of a dead animal.

That was especially true in 2015 when Minnesota dentist Walter Palmer was vilified for killing Cecil, a renowned lion in Zimbabwe. Palmer killed Cecil during a trophy hunt in which Cecil was lured out of a national park where he was legally protected. But Zimbabwe declined to prosecute Palmer, and later dropped charges against his guide.

2. An economic argument for trophy hunts

While acknowledging that Cecil was killed illegally, conservation scholars Niki Rust and Diogo Veríssimo argue that legal hunting with well-enforced quotas can advance conservation. They point out that hunters bring revenue to remote areas that are unlikely to become ecotourist destinations:

“Conservation costs money – so does the damage done by lions killing livestock. It is not clear whether photographic tourism alone could cover these financial burdens.”

But Montana State University ecologist Scott Creel cites statistics showing that lion populations in Zimbabwe, Zambia and other African nations have declined despite guidelines for sustainable takes. In a study of these regimes, Creel and his colleagues concluded that limits needed to be much stricter. They proposed a formula that would allow killing approximately one male lion, at least seven years old, per year in a 2,000 square kilometer range for three consecutive years, followed by three years for recovery.

Moreover, Creel argues, trophy hunting at any level will not be sustainable unless African nations also control poaching, habitat loss and retaliatory killing of lions that attack humans or livestock.

Trophy hunting isn’t just an issue in Africa. The government of British Columbia announced plans in 2017 to phase out trophy hunting of grizzly bears, although hunting bears for meat would continue. Officials said trophy hunting did not threaten the province’s grizzly population, but public opinion had turned against the practice.

Assessing Canadian debates over grizzlies, Courtney Hughes and Lindsey Dewart of the University of Alberta note that habitat loss, population fragmentation and climate change all threaten the bears more seriously than trophy hunting, and call for steps to address those problems:

“That’s why now, more than ever, we need consolidated action to manage grizzlies – not more argument. If we want grizzly bears to remain in our future, we need to set aside our differences and find some common ground.”

To highlight #sportsmen contributions 2 conservation I installed Big Buck Hunter in the employee cafeteria. Get excited for #hunting season! pic.twitter.com/gLxpAqEzpm

Trophy hunting also takes place in Australia and New Zealand, but the targets are introduced species, such as feral goats and estate-bred deer. In contrast, James Cook University historian Claire Brennan observes that Australia’s native saltwater crocodiles once were widely hunted, which led to their decline. Now crocs are protected, even though they can threaten humans.

“Australians need to consider if they really wish to entice elite international hunters to Australia using a native species (even one as unlovable as the saltwater crocodile) as prey,” Brennan states. Her clear implication: Managing an introduced pest is a more legitimate rationale for trophy hunting than targeting a native species.

"I have to say it's one of the most distressing films I have ever seen. Not just distressing for the content, which is trophy hunting described and portrayed in an incredibly brutal way (…) But because the film is so naïve. It does not give you, me, the viewer, the opportunity to make any kind of informed decision. There are no statistics, it is fact free, and it does not present two sides of the debate!" – Will Travers OBE, President of Born Free, interviewed by Green World TV following the screening of Trophy | #TrophyTheFilm