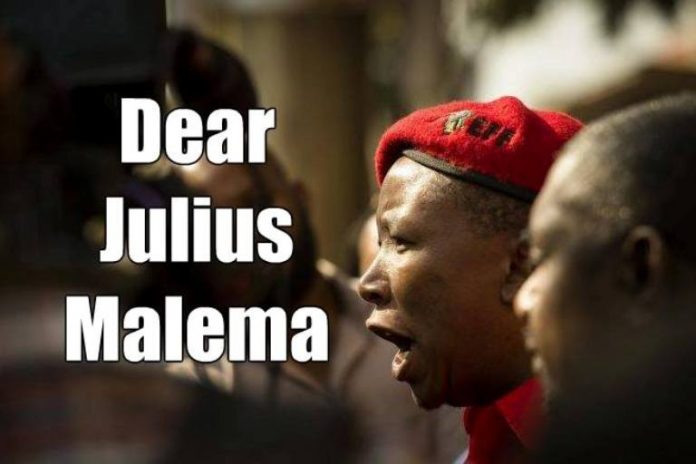 During the past week there has been a lot said and written about the EFF’s protest actions last weekend at H&M retail outlets, and everyone has a point of view… but there’s been one post that just keeps getting shared. At last count the post – which is an open letter to EFF leader Julius Malema – had received over 15,000 shares. 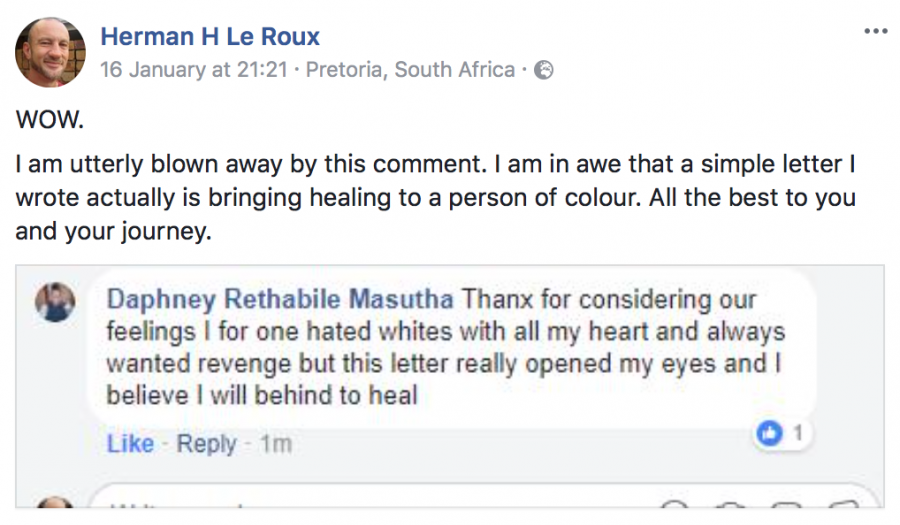 The post has proven so popular – attracting love and hate mail – that it has propelled Herman into becoming a ‘voice’ for several groups of vulnerable people – and animals!- and has earned himself over 9,000 ‘friends’ on Facebook.

Herman – who describes himself on social media as an activist, writer, dog lover, bipolar and fundraiser – has used the spotlight to raise funds for animals in need, and has initiated a campaign to help supply animal shelters with water after Day Zero arrives in Cape Town.

If you have not yet read it, here’s the post that started it all – Herman Le Roux’ letter to Julius Malema:

So, an advertisement with a black child with a shirt on has you and your party up in arms. You go and you damage private property. Your followers make comments of murder, rape, burning humans.

You see Julius, the average white South African has moved on with their lives. They try within their means to make a living, they are not racist and they live decent lives. Yet you and your cronies think that white = racist. Yes, there are still those that hang their old flags and sing their old anthems. Trust me, they annoy us as much as they annoy you.

You see Mr Malema I have seen the suffering of people of colour, I see them in the public hospitals, the clinics. Utterly poor. I have also seen the same suffering of white people.

My friends and I, we are blind to colour. When we do our outreach work we assist anyone, black, white, male female, human or animal. Are you aware of the plight of animals? Of black lesbians that are raped to “correct them”.

Do you know of the suffering of the mentally ill, children of all colours, the aged, gay people – in this country. Do you care?

You see Mr Malema I refused to do military service, I refused to fight for a country that denied some people rights. I openly voiced against apartheid. I know more about the struggle than many of the people in your party because I was part of it. This country was not only liberated for you, it was also liberated for me. This country was liberated not by you, but by a combined international effort of people of all walks of life and all colours – for all of them.

One of your comrades, the departed Chris Hani said ““What I fear is that the liberators emerge as elitists …who drive around in Mercedes Benzes and use the resources of this country …to live in palaces and to gather riches.” That is exactly what is happening.

You see, you can look for racism and hate anywhere and you will find it. I totally approve of fighting it, but when you start using things that are not racist (the child’s own mother did not have an issue), so that you can get 15 minutes of fame, and in the process threaten, cause damage. Then Mr Malema you need to not question those you hate, you need to question yourself. The HM ad was insensitive, should be removed and they should offer a public apology. The racial fallout of hate after that does not justify the original wrong. Both actions are wrong.

Violence, hate, racism, the destruction of property has no place in South Africa…

Alan Paton once wrote a book called “Cry the beloved Country”. Maybe you read it. If Mr Paton wrote that book today I somehow think the title would be the same.

Your hate, promotion of violence, your inciting anger, violence and racism is a blemish on the name of this country that we all love.

Some call you revolutionary. You are everything but. I am as African as you. My parents were born in Kenya, they speak Swahili fluently. I was born in South Africa. My ancestors have been here for hundreds of years…

We fight for what is important. Children dying of hunger, pollution, poverty, actual racism, animal rights. Those are the important things in this lovely South Africa.

Since posting the message, Herman says he has received “loads and loads” of comments,  (including “vile comments” from both sides, which he removes as “they have no place”). He says “the majority however agree and do so with integrity and educated words”.

“Just like there is no place for the people that still cling to the past of hate and indoctrination, there is also no place for hate and violence to resolve hate.

“We are all Africans. What we do with that is up to us,” he says.

Of the incredible success of his post, Hermans says: “Does this now mean I am someone? Of course not. It just means that a group of people have found a voice. I may write the words, I may do the videos, the viral posts. But, it is and always will be you that take that out there. Without that, my voice will not mean much.

“So, to each and everyone of you, whether it be for animal rights, the rights of the mentally ill, gay people, the disabled or women, thank you. I may not always comment, but I do read each and every comment…

“Thank you, so much, for bringing value to my simple life…”

Dear Julius Malema So, an advertisement with a black child with a shirt on has you and your party up in arms. You go…