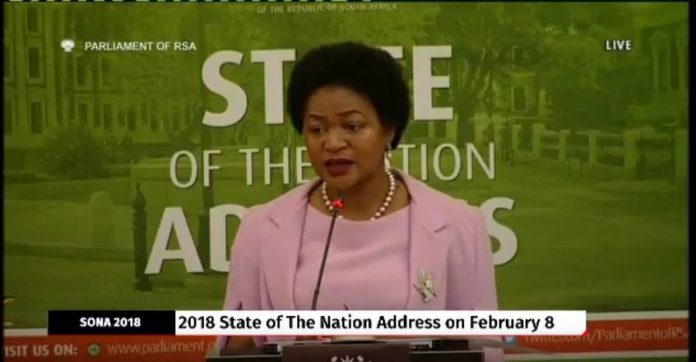 National Assembly Speaker Baleka Mbete says a request by the President to deliver the State of the Nation Address has been approved.

Parliament’s presiding officers on Thursday briefed the media on the readiness of Parliament to host the State of the Nation Address (SONA) next week Thursday, 8 February.

The joint sitting of the National Assembly and the National Council of Provinces (NCOP), where the sitting President will deliver the address, is a special sitting with only the State of the Nation Address on the agenda.

“I am not aware of any request by the presiding officers for the President not to come (sic). We have received his request to address Parliament and that has been approved. This is why these preparations are in place.

“It cannot be correct that because there is a threat of disruption, that we tell the President, as the Head of State, not to come to speak here,” Tsenoli said.

The Deputy Speaker called for those who have threatened to disrupt the speech to desist from doing so.

The presiding officers said they are in talks with the Department of Public Works with the aim of averting a possible negative impact the Cape Town water crisis might have on the State of the Nation Address.

“On behalf of Parliament, the presiding officers note the risks associated with the water crisis of the Western Cape – Cape Town in particular – and its potential impact on the State of the Nation Address.

“Discussions are ongoing between the Department of Public Works and other stakeholders to ensure that any potential negative impact is averted,” Mbete said.

She said this as the city braces itself for Day Zero – when taps will be shut due to depleted dam levels – which is brought about by the worst drought to hit the metro in years.

The Speaker said, meanwhile, that this year’s State of the Nation Address comes as the country prepares to mark the centenary anniversary of the birth of the first democratically elected President Nelson Mandela.

She said the event will be held under the theme ‘Making your future work better – learning from Madiba’.

Meanwhile, Mbete said the budget for the State of the Nation Address has progressively decreased since 2014.

She said this was in keeping with Parliament’s commitment to manage public finances prudently.

While R9.2 million was budgeted for the 2014 State of the Nation Address, the actual spend was R6.3 million.

She said presiding officers were working with the security cluster to ensure that the event is secure.

About 1 120 guests have been invited to form part of the event and they are drawn from all sectors of society – including youth, women, representatives of Chapter 9 institutions, international organisations, heads of foreign mission, representatives of the House of Traditional Leaders and the Mayor of Cape Town, among others.

Media interest in the event remains high, with the Speaker announcing that 1 000 members of the media applied for accreditation.

EFF CIC @Julius_S_Malema’s letter to the Speaker of National Assembly on Tuesday, 30 January 2018 requesting Parliament to be convened to hear a Motion of No Confidence in Zuma before #SONA pic.twitter.com/84kxvVi1a3