South Africans are known for being incredible entrepreneurs. And nobody proved it more than SA expat Elon Musk, when he launched his Tesla sports car into space this week!

So when President Donald Trump tweeted congratulations to Elon, and claimed it as “American ingenuity at its best”, many tweeted back reminding Trump that the former Pretoria High boy was born and raised in South Africa:

Occupy Democrats – who oppose Trump’s drive to replace the visa lottery system with a merit-based one instead – went one step further and created an image that quickly went viral. It appeared to show a quote from Elon Musk himself (but is not):

Tbh, Elon did not get in to America through the lottery system anyway. He got a Canadian passport through his mom Maye, and then moved to the USA when he was offered a scholarship at the University of Pennsylvania. He later got a green card, and became an American citizen in 2002.

The fake Donald Trump / Elon Musk news has spread further, with a screenshot being shared that purports to show Elon’s response to Trump as being the following:

It’s absolutely untrue. Elon’s real reply was: “Thank you on behalf of SpaceX. An exciting future lies ahead!”:

Thank you on behalf of SpaceX. An exciting future lies ahead!

South Africans have seldom been prouder than this week as the whole world celebrated an exciting re-introduction to the space age (except for those who are a little concerned about the environmental impact of space trash)!

One KwaZulu-Natal grandmother said: “I knew the family when Elon was a very young boy. They visited our home in Zululand and I remember Elon always sitting on top of an old Cannon on wheels… Seems already he had his sights set on this sort of amazing world-breaking, massive achievement… So proud of our South African boytjie Elon Musk!”

But none summed up the audacious achievement, and what it means for the whole world, as well as renowned writer Gus Silber… 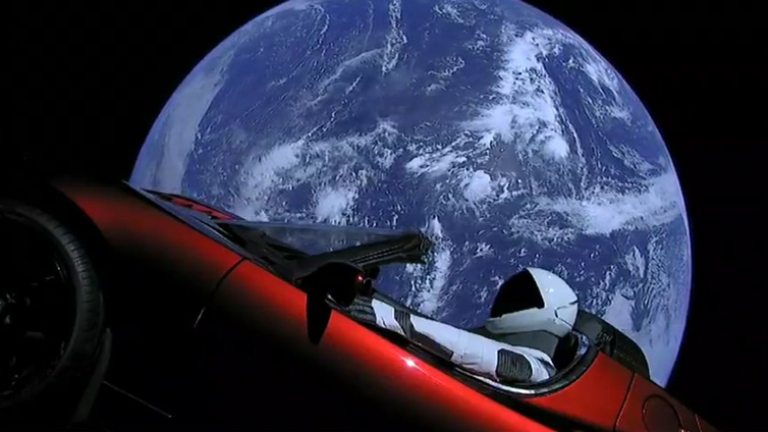 What a moment today has been in the history of the planet we call home. Somewhere above our heads, thousands of kilometres high, floats a speck of grit in the canvas of the heavens: a gleaming cherry-red Tesla Roadster with alloy wheels, and in the driver’s seat, arm casually slung over the window, sits a mannequin in a space suit, a proxy for the entire human race and how far we have travelled.

The sign on the dashboard reads DON’T PANIC!, the panicky injunction from the opening book of the Hitchhiker’s Guide to the Galaxy, and on the stereo, in an infinite loop, Space Oddity by David Bowie is playing, over and over and over again.

In space, of course, there is no sound, just the eternal stillness of eternal night, so I put on the song on Google Play while I watched the livestream of the first car in orbit, the payload of Elon Musk’s monster rocket, the Falcon Heavy, which in itself is a sly, schoolboyish pun for the size and capability of the beast, with its 27 engines generating 5-million pounds of thrust at takeoff. It’s so Falcon Heavy, man.

On one level, this voyage, ostensibly a test flight, is the most audacious marketing stunt ever performed on or off the earth, but on another, there was something deep and sublime about the trajectory of this flying car, cruising in the silent void where we don’t need roads.

“For here am I, sitting in a tin can, far above the world,” sang David Bowie, as the reflection of the small blue planet oozed like a globule of mercury along the glossy red curves of the convertible, and a burst of sun cast a flare into the blackness.

Far below the Tesla, lay earth, aswirl with clouds, the planet of war and madness and the venality of politicians, but the planet, too, of hope and love and wonder, and the genius of scientists and engineers who conceive the impossible, and then touch a button to count it down on a plume of fire into space.

The roadster is on way now to the asteroid belt, between the orbits of Jupiter and Mars, where it will wander, says Elon Musk, for a billion years. And if any other species out there happens to chance upon it, what will they think of us? 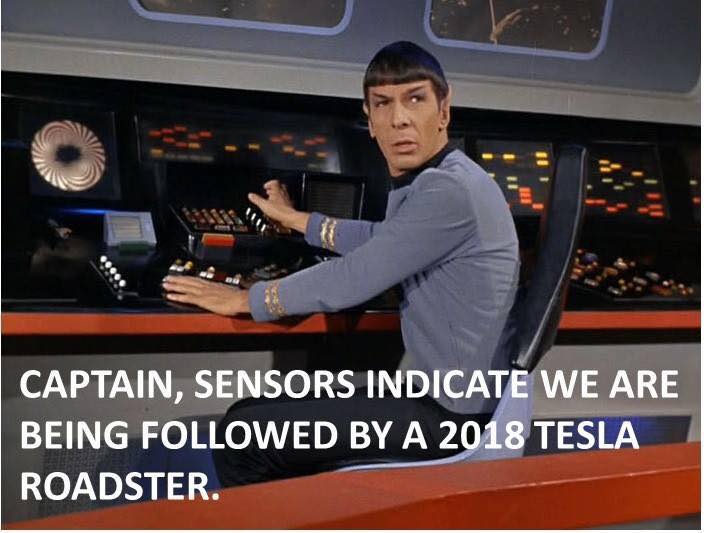 That we are a race of dreamers, that we can build beautiful machines, that we can make art and music that lasts long after we have been turned back into stardust. Thank you, Elon Musk, Douglas Adams, David Bowie.

We still have a lot of things to fix down here on earth, but if you gaze up for a moment, you’ll know why human beings are compelled to do these things too. Because the stars look very different today.

View from SpaceX Launch Control. Apparently, there is a car in orbit around Earth. pic.twitter.com/QljN2VnL1O