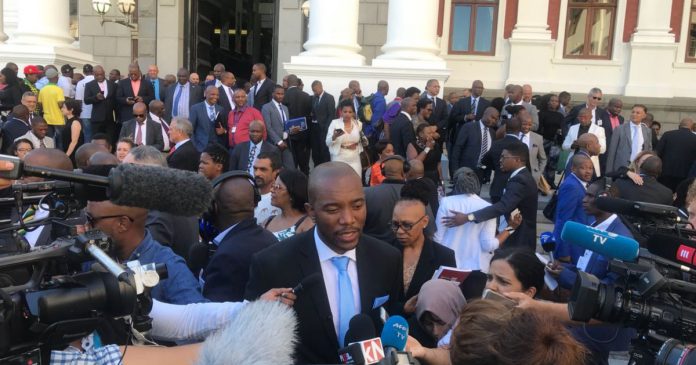 The ANC government is “making the people of South Africa pay back the money that they [the ANC] have stolen”, claimed Mmusi Maimane after Wednesday Budget Speech was delivered in Parliament by Finance Minister Malusi Gigaba.

The Democratic Alliance (DA) Leader said the 1% increase in VAT and the fuel levy will see the cost of food and travel increase significantly. “The poor will be hardest hit,” he claimed.

Others – including Azania Matiwane, Deputy Chairperson of Black Wealth Foundation – argued it is not the poor who will be hardest hit as they mainly depend on milk and bread (and basic necessities including zero-rated food items are exempted). It is the middle-income and rich who will feel the most impact, he claimed.

He said the budget “protects the civil servants’ bloated salaries and bonuses, at the cost of poor South Africans.”

The DA’s Deputy Shadow Minister of Finance, Alf Lees, added that the announcements are nothing less than a “massive body blow to poor South Africans”, the repercussions of which will be to dampen economic growth and fail to create much-needed jobs.

“The VAT increase of 1 percentage point is a smack in the face for the millions of South Africans who face a daily battle to put food on the table. This increase, combined with the new fuel levy increase, will force poor South Africans to pay more for basic goods, services and transport.

“Instead of taking decisive action to cut wasteful expenditure and trim the fat, the Minister has introduced proposals for cost-cutting that will only reduce service delivery,” he said.

The Minister said he was referring specifically to the following:

The choice to cut funding for building schools and employing police officers will only put the futures and safety of our people at risk and is a terrible tradeoff, said Lees.

“The allocation of R57 billion over the medium term to fund poor students in higher education may seem like a step in the right direction. However, it is not sustainable and fails to address the true nature of the problem and the decades of chronic underfunding of this sector.

“Instead of stabilising the national debt levels, they will continue to rise to R 3.3 trillion over the next three years and debt service costs will amount to R 592 billion over the medium term.

“The once-off provisional allocation of R6 billion to drought relief is symptomatic of the short-term planning by National Government which lead to the current water crisis in the first place,” he said.

Yesterday the DA set out its own budget proposal, including the sale of assets such as parts of Eskom, which could save R112 billion and avoid tax increases.

“All in all, the Minister has failed to cut the fat and has opted instead to protect the few and reach into the pockets of poor South Africans to cover the cost,” said Lees.

AfriForum has hit out at Gigaba over free higher education, calling it nothing more than “politicking” and “doomed to failure”. The organisation pointed out that “a mere 5% of poor people obtain university exemption” and says that the money can be better spent by addressing the school system.

The ANC said it welcomed its minister’s “redistributive and people-centered budget”, particularly the allocation of almost R60 billion over the next three years to fund fee free higher education and training for children from poor and working class backgrounds.

The increase in VAT and the fuel levy will see the cost of food and travel increase significantly. The poor will be hardest hit."

My only comment on the budget. Even the much hated Class of 1996 never increased VAT because they knew of its impact on the poor. The poor are not only those who receive social grants but working people who rely on basic foodstuffs for survival, looking after large families.

Let me understand this VAT hike. The poor will be taxed (via VAT) to fund free higher education for the poor, then?#BudgetSpeech2018 #BudgetSpeech

OUTA's @wayneduv: "Society and the general taxpayer is sick and tired of seeing taxes increases year after year, with additional tax streams being introduced, while maladministration and corruption continues unabated." #BudgetSpeech2018

We should rename VAT. It’s actually Zuma Added Tax – ZAT ©️. The price we pay for corrupt leadership and billions stolen under his watch. #BudgetSpeech2018 https://t.co/LYVBJo8oao

Gigaba was found guilty of lying under oath & violating the Constitution while he was Minister of Home Affairs.

"If you're prepared to lie under oath, how are we to understand what is credible in #budgetspeech2018" pic.twitter.com/qJxjQprwex

If this is truly a new dawn, why must a disreputable, corrupt and unpatriotic Gigaba present the budget?#GigabaMustFall

Just a friendly reminder that the smooth, shiny man on TV, entrusted to bring you the "tough" budget speech with its tax increases and infrastructure cuts, is the very same man who let the Guptas raid our SOEs for years. #NewDawn #BudgetSpeech2018 pic.twitter.com/RCN6byhx6e