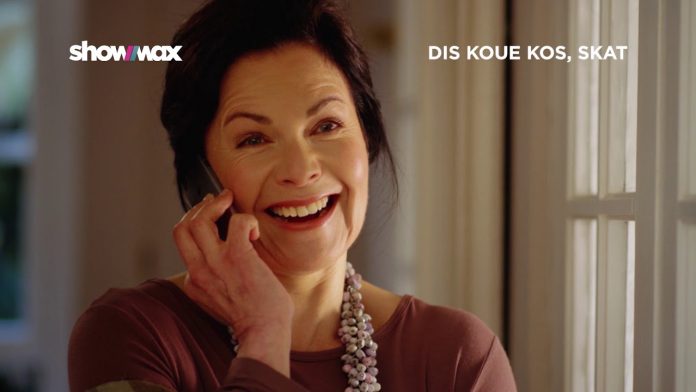 Dis koue kos, skat is a South African romantic comedy film with a massive, warm heart. From today (13 March 2018), Showmax subscribers living outside of South Africa can sit back to enjoy this deliciously entertaining film.

As you’ll see from the trailer, it’s a world class film, with English subtitles, comparable to hits like Love, Actually and Notting Hill. It’ll make you believe in love again – and make you crave a hearty meal!

If you’re a South African living abroad – subscribe to Showmax for this and many other fantastic local shows and movies. Click here for a 14 Day FREE Trial!

The movie is based on Marita van der Vyver’s bestselling novel (known as ‘Just Dessert, Dear’ in English), with Anna-Mart van der Merwe playing Clara Brand, a woman whose husband (Deon Lotz) leaves her for her much younger colleague and friend (Angelique Gerber).

In the aftermath of the divorce, Clara rediscovers her love for food and eventually she meets Ari (Frank Opperman), who cooks with as much abandon as she does – and then things get spicy!

If you’re a South African living abroad – subscribe to Showmax for this and many other fantastic local shows and movies. Click here for a 14 Day FREE Trial!