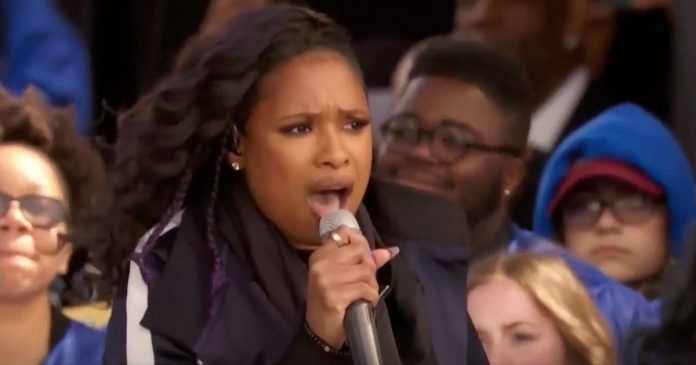 American Oscar-winner and singer Jennifer Hudson delivered an emotionally-charged rendition of Bob Dylan‘s “The Times They Are A-Changing” at an anti-gun violence march in Washington DC on Saturday.

Her performance, with a church choir, was made all the more powerful by her tragic personal connection with gun violence – in 2008, Jennifer lost her mother, brother and 7-year-old nephew when they were shot and killed by her former brother-in-law

The actress, who starred as Winnie Mandela in a 2013 movie, held back tears today on stage as she told the gathered crowd: “We’ve all lost somebody” and “we don’t get them back, y’all.”

Massive crowds rallied across America on Saturday against gun violence, with the entire crowd in Washington at the ‘March For Our Lives’ event chanting “We Want Change!”, along with Jennifer.

Ironically, at the time of her family’s tragedy, it was Donald Trump who stepped in to help Jennifer and some of her surviving family members… by putting them up at his Trump International Hotel & Tower in Chicago for free. At the time, Trump said: “They are safe. She’s a great girl and we’re protecting them well.”

The powerful moment when Jennifer Hudson — who lost her mother, her brother and her nephew to gun violence — sings on stage after Emma Gonzalez's stirring speech at the #MarchForOurLives. pic.twitter.com/Xikutbz9Oo

She lost her mother, brother and nephew to gun violence