“Land expropriation without compensation.” So… what does that phrase actually mean? And how does it affect all the peoples of our country? Melanie Walker reports, as South Africans have 24 hours – until Friday 15 June 2018 – to make their voices heard for or against changing the Constitution. (See bottom of the page for some commments and ways you can have your say.)

It’s a hotly debated topic here down south at the moment, as it seems there are more people who are interested in scaremongering or stirring up foment rather than explaining to the many in layman’s terms what is actually happening.

Whether we like it or not, the ‘act’ is well in the works. But this doesn’t mean that we’re all going to have our homes taken away from us.

The way the Constitution is worded at the moment is the part that is bothering people. As the ANC pushes for Section 25 to be amended to allow for expropriation without compensation, many have realised that they don’t, in fact, need to make the amendment… as in terms of that Section: it is “just and equitable” that compensation be set at zero, that is allowed under the existing “property clause”.

The litmus test is what is just and equitable in a given case? Section 25 (8) of the South African Constitution allows “any departure” from the provisions of section 25, including sub-section (2) (b), the right to compensation. Departure means – in the context of expropriation – that when the state expropriates it may do so without compensation.

There are certain questions that have arisen.

For instance, which land is going to be affected? Would it be permissible for the Constitution to allow different standards to apply between those who own farms versus those who own houses?

With the EFF (Economic Freedom Fighters) making statements firstly, that it will include land on which bonded houses have been built, and then turning around and saying it will be only applied to rural land (and commercial farmland, rather than communal areas?), it would seem nobody will lose their homes.

At present, the “property clause” applies to ALL forms of property – commercial farmland, residential homes, informal land rights and property other than land, including stocks and bonds, pensions, intellectual property and other assets.

And here’s another issue, as Ruth Hall of News 24 pointed out: ‘More than half of commercial farmland has changed hands since 1994 – so, should those who bought property last year be treated the same way as those who inherited land from across the generations? Who should be prioritised for land access? How are the rights and interests of owners, tenants and occupiers to be weighed up? Should the land rights of the poor and the rich be treated equally or in different ways? Should the law allow for discrimination by race when land is expropriated? How can the state be held to account?’

And then, what about the over 20 million hectares of land the Government – per the Department of Rural Development and Land Reform – owns? Is it, as the DA asked, that the ANC is continuing to use expropriation without compensation as a “convenient ruse” to deflect attention away from their land failings?

The DA, of course, wants South Africans to be real owners of land with the right to choose, unlike the ANC and the EFF who want the State to be landlord and the people to be permanent tenants on the land.

We’ve already seen the way our Minister of Rural Development and Land Reform, Maite Nkoana-Mashabane, decided to go about setting a test case in action without bothering to wait for Parliament to complete its constitutional review process.

A test case with land to be expropriated, but with no disclosure where it was because that would tip off the current owners to prepare a legal challenge to the illegal land grab.

According to Gary van Staden, Senior Political Analyst, NKC African Economics, instead of “adopting the spirit of dialogue and finding common solutions, this is the attitude of the minister in charge of land reform: to hell with Parliament, they are too slow, and we need to sneak up on people so that their right to legal recourse is derailed.”

Hopefully, with so few people understanding the nuts and bolts of the unnecessary amendment, and a certain amount of obfuscation by the principal players, it won’t end up as a big land grab.

So while we all know there’s a need for land reform and redistribution, it should also be done in the way our becoming beleaguered Constitution would have had it – properly. In a way that doesn’t set rich against poor, black against white, party against party.

Have your say – and quickly. Whether you support it or not, as a South African committed to making this country the best it can be, get to landownership.co.za by 15th June and make your opinion heard.

To have your say in Parliament, fill in the form on one of these two pages:

By law, the Committee has to go through each and every comment.

No, do not change the constitution.

1 – South Africa has one of the best constitutions in the world and it shouldn’t be changed to serve any part of government or section of the population.

2 – By taking the land without compensating the current owner, how do you exspect the country to financially survive? If the goverment wasn’t only looking after their own pockets , there would be funds to buy land for houses. How will the land be distributed fairly? ? People are still waiting for houses the goverment promised in 1994? That has been done fairly? People who really need those houses have gotten first option? Truth be told the people in real need of the houses are still on waiting lists….. My question to you….. will you get the land you are fighting for or will the nephew of the son of some politicians be the new owner of the beautiful farm land???

3 – I understand the past of South Africa and how it impacted a lot of people in the past. However taking land without compansation will only harm the economy no investor will invest in such a country. Its logic you would not invest where your assets are not safe. Also the people who have property in South Africa bought it they paid it off at their bank but they bought it. So taking it from them without compensating them is “stealing” its a violation of human rights. If you bought something you own it and the only why someone can legally take it from you is to buy it from you any other means is stealing of property. I understand people were moved in Apartheid and they have my sympathy but their are other ways to get their property back or make arangements. Two wrongs will not make it right.

2 – The freedom charter declares that south Africa belongs to those who live in it. This includes the land. There should be land reserved for public good, the common good. It makes no sense for violently expropriated land from Africans to continue under the monopoly of minority white settlers. Makes absolutely no sense.

3 – Land poverty is a big problem in South Africa. Land is an asset and lack of land encourages poverty and economic deprivation. Vast hectors of land belong to minorities whilst black Africans are squeezed in small pockets of land. It’s frustrating and a shame! The Constitution is a transformative tool to bring about equalisation and better life for all. The current land ownership status quo represent our bad and dark past. Minorities must come to the party.

Thank You, Says Pretoria Man, As He Awakes to Discover South Africans Raised Over R200,000 for His Medical Bills 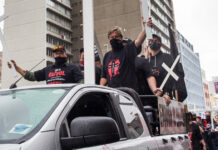 “The Farmers Are Coming!” Protesters March to Parliament

Thank You, Says Pretoria Man, As He Awakes to Discover South...

“The Farmers Are Coming!” Protesters March to Parliament