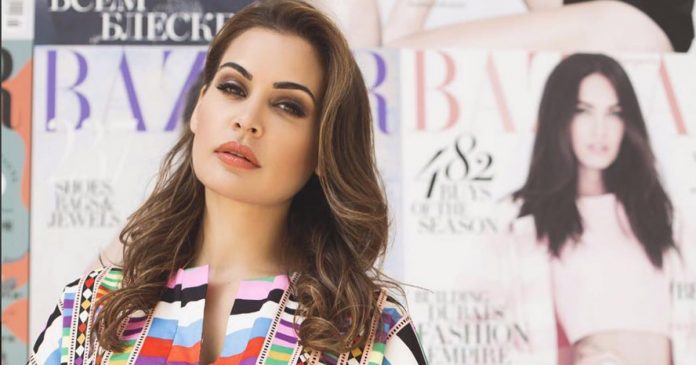 South African model and media personality, Shashi Naidoo has lost most of her endorsements, and her Durban July appearance has also been cancelled… following her comments on social media about Gaza.

Naidoo told a press conference in Johannesburg on Wednesday that she had “pretty much lost all” of her endorsement deals, .

Popular brands like Glampalm Africa, horse racing company Gold Circle and designer Adila Dhorat have all publicly detached themselves from the model since she made the comments.

The TV personality said she had posted an Instagram photo in Ibiza of herself with friend DJ Black Coffee. Someone had criticised her friend for playing in Israel, so she asked another friend – whom she felt was better informed than her on Israel and Palestine – to formulate an “educated response”. Naidoo claims she copied and pasted the response without reading it properly.

It included insensitive comments, with references to Gaza being a “sh*thole”… and sparked a furious backlash – as well as death threats – in South Africa.

At the press conference yesterday, she said: “In terms of personal brand endorsements, yes, I have pretty much lost all my endorsements but I think it was necessary and perhaps it will give me more time to focus on other things.”

She said she does not blame the sponsors for distancing themselves from her.

“I have been thinking about that. I don’t blame. I understand completely that I have to be held accountable for my actions. So, brands choosing at this point to disassociate themselves from me, I don’t bear any animosity, I understand it completely.

“I am going to use my voice to learn more and help others who have been ignorant about the situation.”

The star broke down in tears when asked if she had forgiven herself.

Naidoo has pledged to visit Palestine herself for self-education, and wrote a lengthy apology on Instagram.

It is with great humility that I step forward and not only accept, but again, sincerely and deeply apologise to all that I offended and hurt for my post in regard to the humanitarian crisis in Gaza, and my lack of understanding in my initial apology to the Muslim community. This should of been to the Palestinian people in the first instance, and broader society as a whole. I apologise unconditionally, but I would also like to this opportunity to explain what happened with regard to my recent Instagram posts. I posted a picture with a DJ recently in Ibiza and the post attracted commentary from another Instagram user because he had played in Israel. In what I believed was defense of him, I reached out to a friend to help articulate a response and offer a secondary point of view, as to be honest, I didn’t know much about the situation (although it sure must have looked otherwise). I stupidly copied and pasted the response verbatim in a feeble attempt to appear smart on social media without reading it comprehensibly (I know), thereby entering an issue of world importance, I had no real fundamental understanding of – my biggest mistake. There is no spin. This is the truth. I expressed his worldview as my own, and for that I will forever live with the consequences. I agree with the commentary that it not only highlighted my ignorance on the issue and the way it was handled, but also made me seem uncaring and indifferent to the suffering of any human on this planet. I in no way wish to make excuses or expect people to forgive me at this time. I messed up. I know that, and I take full accountability. All that I hope to achieve is  to convey that I am sincerely sorry, and in a way thank every one who called me out, as I have learnt from this. No matter what ones beliefs are, there is always room for empathy and compassion. The last couple of days have shown me that there is a larger education that I need to undertake on issues facing humanity. I have read the commentary and will further not only educate, but re-educate myself . Words will never be enough to express how truly sorry I am. It will be in my actions going forward that I do better.

WATCH Shashi Naidoo: My apology will be in my actions