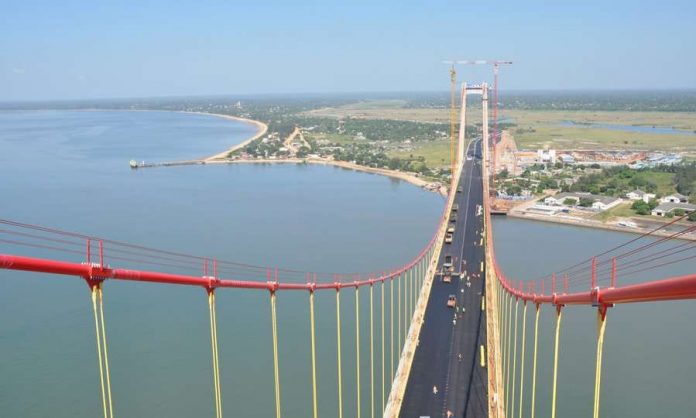 The travel time between Maputo and Kosi Bay has just been DRASTICALLY reduced… from six hours to 90 minutes!

“This is a huge achievement! It will boost trade and tourism between South Africa and Mozambique.”

The department’s comment was accompanied by a hashtag KZNOpen4Business. There will also be many very happy South Africans who enjoy escaping to Mozambique’s beaches and wilderness for a holiday break.

According to Chinese media outlet, Xinhua, this is the longest suspension bridge in Africa. It forms part of China’s Links Roads project, and is built  by the China Road and Bridge Corporation, with “Chinese financing and standards” (the financing amounting to a reported $750 million).

The bridge was a dream of former Mozambique president Samora Machel. The charge to cross the bridge will be approximately $3.

One of the South African engineers on the project, Lawrence James Lovell Greene, told SAPeople there is a lot of joy now that people can “finally cross the bay instead of having to use the very dangerous and unreliable ferry.

“South Africans can hold their heads high – we in fact were given a commendation from the Concrete Society in SA for concrete of the highest quality (lab tested in SA) as the bridge is designed for over a 100 year design life.”

where are you from?
I am from Mozambique, Maputo. pic.twitter.com/VdAUdk7s5Q

Construction on the bridge began in 2014, and this photo was taken last year:

Mozambique has opened the longest suspension bridge in Africa, China-financed for $750m, Maputo to Catembe, cutting a 2-hr drive down to a few minutes, and opening up the capital to KZN. Strange it's only been reported so far by overseas media. Here's a pic I took last year. pic.twitter.com/jjzQEQLRqN