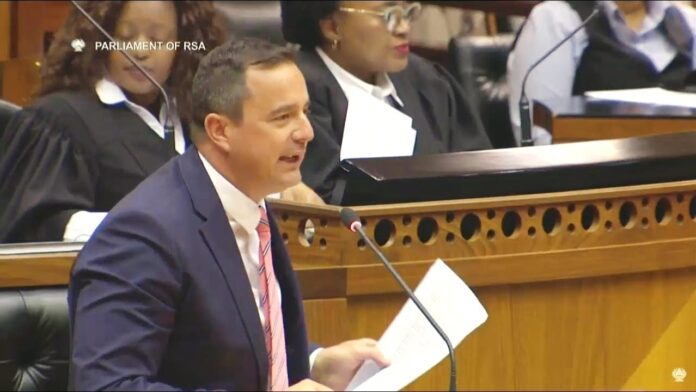 Democratic Alliance Chief Whip John Steenhuisen today responded to claims that he should not be the DA’s Chief Whip in Parliament without a university degree.

Steenhuisen delivered another epic speech, although he was interrupted several times (at one point saying “this is harassment, come on”). Watch below.

Here’s a full transcript of John Steenhuisen’s speech in Parliament regarding his not having a degree:

For those learned individuals in the House today expecting an academic lecture from this podium, sorry to disappoint you. This is Parliament, not a university convocation.

The Constitution of the Republic is very clear about who qualifies to be a member of this House. The framers of the Constitution made it this way so that it didn’t matter whether you’re a mineworker or a brain surgeon – you could still participate in our democracy.

And how ironic it has been, to see the EFF, the so-called vanguard of the working class argue now for some kind of qualified franchise, but only those with university qualifications can be elected and serve in this parliament.

You see this is the ultimate hypocrisy. The EFF…

EFF Interrupts: Steenhuisen is accused of misleading the House – it was the DA’s leadership in KwaZulu-Natal who suggested representatives in Parliament must have qualifications.

Another EFF Interruption: “He’s too pompous.”

Like the old English upper classes who kept the working class locked out of Parliament with their Oxford degrees and their Cambridge qualifications, they don’t want ordinary South Africans to be part of the decision making process in this house.

Let me be very clear. I don’t have a university degree. I’ve never pretended that I did have one. I enrolled for a BA in Politics and Law and due to financial and work pressures I couldn’t finish it. I’m not ashamed of this – and you can laugh all you like…

EFF Interrupts: “You also don’t have a matric. Mention it as well.”

I was elected as a City Councillor at the age of 22. For the last 20 years, wherever I’ve served I’ve represented the citizens of this country honesty, diligently and with my very best efforts.

EFF Interrupts: “This is irrelevant.”

It amazes me that this party of academic elitists who parade on Instagram in academic gowns is the one party that consistently resorts to thuggery and chaos in this House.

If that is what a university education gets you, if that is superior logic, you can frankly keep it.

But let’s call out the last 48 hours for what they really are – a smokescreen.

Whether it’s this ridiculous attack on me, or the disgustingly personal denigration of Minister Gordhan and his family, or the vile abuse the EFF have meted out to journalists who’ve exposed them, it is a smokescreen. A smokescreen to mask the corruption of their party, and the network of patronage and rent-seeking that resulted from the looting of VBS Bank.

The EFF knows that this is fatal to their brand, because they have stolen from poor people that they claim to represent. They are desperate to re-focus the public’s attention on something else, and they will use anything – me or Minister Gordhan to do so.

EFF Interrupts: Steenhuisen is accused of misleading and “casting aspersions” on the leaders of the EFF, and told he should substantiate what he’s saying and go back to school; they don’t want to be insulted by the “racist DA” who’ve come to Parliament using “white privilege” and received Gupta money (they say).

The Speaker of the House says Steenhuisen can continue because he referred only to the EFF party and not the specific leaders. The EFF disagrees and is adamant he referred to the leaders. (Although Floyd Shivambu’s name was in Steenhuisen’s written speech, he didn’t mention the EFF leaders whilst addressing Parliament.)

IFP Interrupts: Requests for the Speaker of the House to “kick people out” so that Parliament can get on with its business rather than listening to the “tit for tat of the DA and the EFF”.

The hidden hypocrisy and their leaders’ lavish lifestyles – we are not afraid of this little band of wannabe-revolutionaries with their academic postering who think that by quoting Karl Marx, Frantz Fanon and Chairman Mao makes them friends of the working class.

WATCH John Steenhuisen on why he should be in Parliament, despite not having a degree

WATCH: John Steenhuisen responds to claims that he should not be the DA's Chief Whip in Parliament without a university degree.

🎞 Without the spurious points of order 🎞 pic.twitter.com/yvsgBAfdfo

WATCH EFF vs DA John Steenhuisen on his qualifications

Emam suggested the Minister of Education should introduce a Degree on Integrity where you learn that don’t steal and you don’t loot!