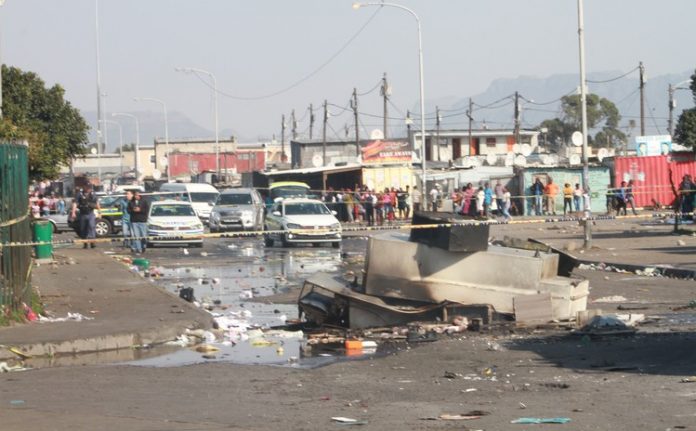 Two people died during a stampede as shops were looted in Samora Machel, Philippi, Cape Town, at the weekend. (Watch Carte Blanche’s latest episode below on the looting taking hold in SA against foreign nationals.)

The looting started at Super Spar then moved to immigrant-owned small businesses. While people were taking items from the supermarket, a women fell and was trampled. She died on the scene. Another body was discovered after clearing the shop and is also suspected of being trampled to death. Unrest in the area started on Saturday night and continued on Sunday morning.

Community leader Xolani Joja said the looting had nothing to do with service delivery. “I am disappointed because we have been communicating with the community after seeing what is happening in other provinces. They looted the Spar supermarket and ATMs were damaged. People will lose jobs because of selfish people.”

Joja said leaders would work to bring calm to the area and protect shops that had not been looted. “It will not be easy because shop owners are scared, and others are packing.”

An immigrant from China said he was confused and scared. “You do not know what they will do to you when they find you inside the shop. I am confused as to why the looting took place. What did we do?”

Some shop owners hired trucks and were packing to leave the area.

Madoda Sonkanyile was against the looting. “These are humans with blood like us. The police should not be lenient on those arrested.”

The South African National Defence force joined the police on Sunday to comb the scene and search houses for stolen items.

Lieutenant Andrè Traut said 25 people had been arrested for looting the grocery store. “Several smaller shops were also targeted by protesting community members.” He also said Operation Lockdown and additional police would remain on high alert in the area.

“Five other people had been arrested for being in possession of groceries and a deep freezer when a house was searched in Samora Machel,” said Traut.

The dead had not yet been identified. The suspects would appear in court in Athlone this week, Traut said.