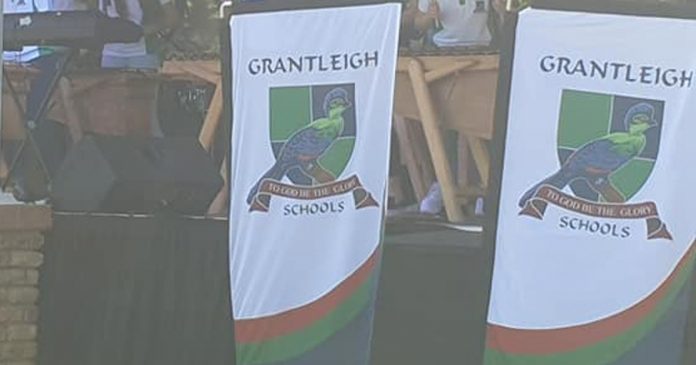 Following an outcry on social media in South Africa about a Grantleigh matric student’s artwork (which one father described as ‘demonic’ images, in a video that has gone viral), the executive head of the school near Richard’s Bay has issued a response. Others have also reacted, including a former Headboy who has penned an open letter to the school (see below) and the Democratic Alliance (DA) which urged concerned parents from the exclusive Independent School to refer their complaints to the Commission for the Promotion and Protection of the Rights of Cultural, Religious and Linguistic Communities (CRL).

Grantleigh’s Head, Andrew Norris, said the project that was featured in the video (which includes a clown replacing God and Jesus, and torn pieces of pages from a Bible) is part of a final submission to the IEB. It appeared in the foyer as part of a year-end exhibition.

He said the matter is currently subject to an internal investigation.

Norris said: “We want to reiterate that comments made is not an accurate reflection of the school and the situation referred to and we reserve our rights in this regard.”

He said constructive comments that lead to meaningful discussion are welcomed, but that “we do not condone cyber bullying, religious intolerance, hate speech, derogatory language, misrepresentation and comments reflecting negatively on our brand on any social media pages”.

Response to ‘Demonic’ Artwork from the DA

The artwork and video has drawn responses from around the country. Dr Imran Keeka, DA KZN Spokesperson on Education, called on concerned parents at the school to refer their complaints to the CRL.

Dr Keeka said “there can be no denying that the images within the clip are deeply disturbing.

“Equally alarming is that they are within the walls of a school with a strong Christian ethos. There is, however the South African Bill of Rights, which must be respected.

“Notwithstanding, it must also be remembered that the freedom of expression, which is an inalienable right in the same Bill, is not without limitations and responsibilities related to such freedoms.”

The DA says it therefore believes that the CRL is well placed to give its opinion.

The DA has also raised the matter with KZN’s Education MEC, Khwazi Mshengu, so that he can exercise his Executive authority – together with his HOD – to get to the bottom of the matter.

Open Letter to Grantleigh from the Headboy of 2011

The following letter was submitted to SAPeople by former Headboy, Sinjon Moffett:

I, alongside many South Africans, have recently been witness to the artwork prepared by one of your current Grade 12 learners that formed part of the year-end exhibition. I have also been following the widespread upheaval in reaction to this display.

Furthermore, I have seen the school’s official preliminary response. I believe it is my responsibility as a past-pupil and a representative of the Christian faith to voice my deep disappointment over this matter. Before I do so, I would like to point out the following:

I am well aware that the learner who created these artworks is perhaps revelling in the amount of attention their work is currently receiving. I am also aware that you perhaps consider this situation to be a statement on the school’s behalf to disassociate yourselves with the Christian ethos rooted in the school’s history. With all this in mind, I have one question I would like to pose to you:

Why was it deemed appropriate to publicly deface, misrepresent and mock the figure who many within the Grantleigh family, as well as millions of people globally, worship as their God?

Grantleigh, you are responsible for this iniquity against all the people who follow Jesus, and against God himself. I hope that you are humble enough and wise enough to accept this responsibility, ask for forgiveness, and disassociate yourselves with the artworks and the artist.

With love, as a proud Grantleigh alumnus,

Friends of the artist have told their parents that the learner was trying to show how empty life has become since people replaced spirituality with materialism like McDonalds (represented by the Ronald McDonald clown). In response to this, Moffett told SAPeople: “If that was the motive of the student then it seems strange that hundreds of Christians were instantly offended by the imagery. If it was a pro-faith message then it was at the expense of the image of the Christian faith’s figurehead, Jesus Christ. Knowing that was the motive would not change my response. It doesn’t remove the defacing and violence portrayed.”