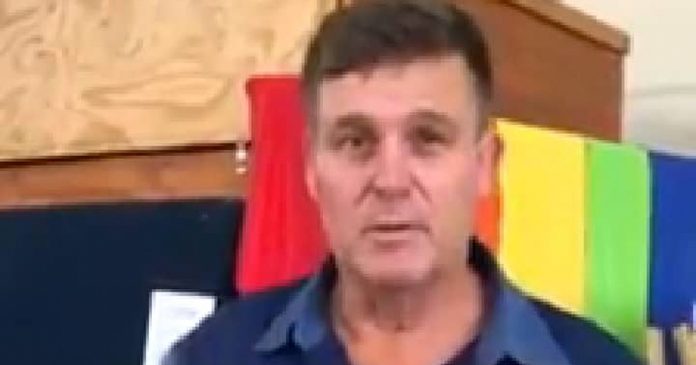 A South African father has called for Christians to “stand against the humiliation and mocking of our faith” after discovering artwork at his children’s KwaZulu-Natal school which depicts God as a clown, amongst other things. Watch below.

Speaking on his child’s last day of school yesterday at Grantleigh outside Richard’s Bay in KZN, Andrew Anderson – who is also a Pastor in the area – called on believers to share the video, protest the school and “stand together against this mockery of our faith”.

He said while he has always loved the school and the teachers who have been so caring, he now calls for future parents to not send their children to the school.

Anderson said he was not emotional but “so upset” by the art displays which not only included clowns and skulls, but also pieces of paper torn from the Bible.

“It broke my heart,” he says in the video. “While they were busy having the prize-winning ceremony… it felt like we were crucifying Jesus all over again… and the person doing the crucifying was being cheered.”

According to Anderson, the person who created the artwork received awards. He also says that the school’s ethos is: “To God be the Glory.”

The school has not yet responded to SAPeople’s request for comment.

Anderson said when he raised his concerns with the headmaster, the head’s response was: “I don’t fear God.”

Anderson says: “South Africa we need to stand up against this. Raise up and protest against the school and all these things.”

Many of those watching the video have said perhaps the father and pastor reacted too quickly on his own interpretation of the art; and have pointed out that the clown appears to be the Ronald McDonald clown, and rather than mocking faith, the artist is drawing attention to what has been lost by replacing spirituality with materialism.

According to one local resident, whose friends have children at the school, the young learner had “wanted to portray how we have replaced spiritual things with material things (eg McDonalds)”. The resident said for him the empty eyes symbolise how empty materialism has left us…

WATCH VIDEO: Father and Pastor Andrew Anderson Speaks Out Against Artwork Depicting God As A Clown

UPDATE: The video appears to have been removed. Some of it can still be seen here: