The murder investigation underway after the bodies of 39 people were tragically discovered in the back of a cargo truck in the UK, is ongoing. UPDATE SATURDAY 16h30 SA Time: On Thursday British police said the victims were Chinese, but today (Sat 26 Oct) it is now being reported that most of the victims were likely from Vietnam. (See interviews in update at bottom of page.) The driver and three others have been arrested.

The grisly discovery took place in the middle of night – at 01h40 – on Wednesday 23 October when paramedics called in Essex Police to investigate a truck container on an industrial estate at Grays, about 32 km east of London.

Police on Wednesday arrested, and have been questioning the 25-year-old driver of the truck on suspicion of murder. He is from Northern Ireland and has been identified as Mo Robinson from Portadown, according to a source close to the investigation. Reuters said police are searching three properties in Northern Ireland as part of the investigation.

Eight of the deceased are women, 31 are men. One is a teenager. They may have already passed away before the truck even arrived in the UK. 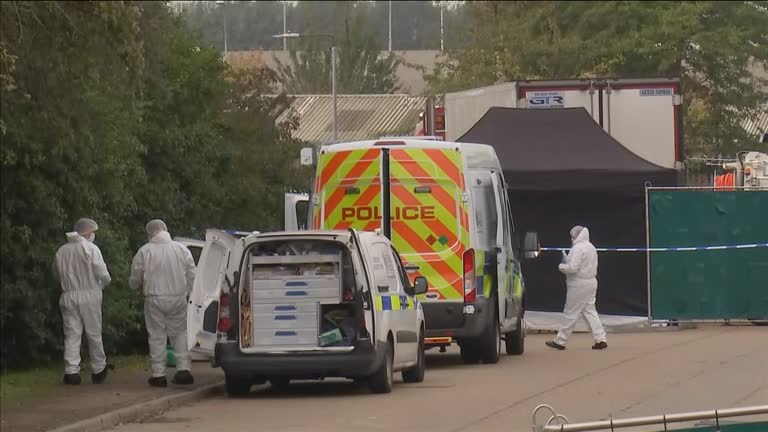 The cause of death is not yet clear. It was initially believed that the truck’s journey began in Bulgaria and entered the UK through a seaport in Wales called Holyhead.

However, today police said the truck trailer arrived at Purfleet docks in Essex, southern England, having travelled from the Belgian port of Zeebrugge, as shown in the photo below.

The head of the Zeebrugge port said on Thursday (October 24) it was not possible for them to detect the 39 people when they went through the Belgian port.

Dirk De fauw, the mayor of Bruges and the chair of Zeebrugge port, said that security at the port was high, with sniffer dogs and heat scanners to determine if people are hidden in the trucks, and patrols around the port. But he added that some trailers were too tightly sealed or too cold to allow the systems to detect a presence inside.

British police had been given extra time on Thursday to question the driver in an investigation focused on human trafficking. All those in the container were pronounced dead at the scene.

De Fauw told Reuters he believed they were dead before arriving in Zeebrugge.

On Thursday police officers signed a book of condolences for the Chinese victims.

“We read with heavy heart the reports about the death of 39 people in Essex, England,” the Chinese embassy said in a statement, adding further clarification was being sought with police.

For years, illegal immigrants have attempted to reach Britain stowed away in the back of trucks, sometimes with fatal results.

In the year 2000, the bodies of 58 Chinese people were found crammed into a tomato truck at the southern port of Dover. The vehicle had begun its journey in Zeebrugge.

The majority of the 39 people found dead in the back of a truck near London were likely from Vietnam, a community leader from the rural, rice-growing community where many of the victims are believed to have come from told Reuters on Saturday.

A Catholic priest from the rural, rice-growing province said: “According to a few sources that have told me, in this case there were many people, more than 100 were on their way to a new life, but 39 died. A few families confirmed the deaths of their relatives who are the victims of this tragic journey.”

Police had said they believe the dead were Chinese. But Beijing said the nationalities had not yet been confirmed.

Four people have been arrested so far on suspicion of conspiracy to traffic people, manslaughter and murder.

Chinese and Vietnamese officials are now both working closely with British police.

Father Anthony Dang Huu Nam said he was liaising with family members of the victims: “When I learnt of the news of the people who died on their way to the UK in search of a new life, but lost their lives instead, not only the district of Yen Thanh but perhaps the whole country is in sorrow. This is a tragedy that the whole country has to bear.”

Nam said families told him they knew relatives were traveling to the UK at the time and had been unable to contact their loved ones.

The area is one of Vietnam’s poorest, and home to many victims of human trafficking who end up in Europe, according to a U.S.-based anti-trafficking organization.

Other victims are believed to come from a neighboring province.

One of them, 26-year-old Pham Thi Tra My, had sent a text message to her mother saying she could not breathe at about the time the truck container was en route from Belgium to Britain.

WATCH VIDEO: British police find the bodies of 39 people. (This was the initial report – the article above is more recent.)

British police found the bodies of 39 people inside a truck believed to have come from Bulgaria at an industrial estate near London https://t.co/SH0LQbCY3U pic.twitter.com/DwTmE4m4Nk