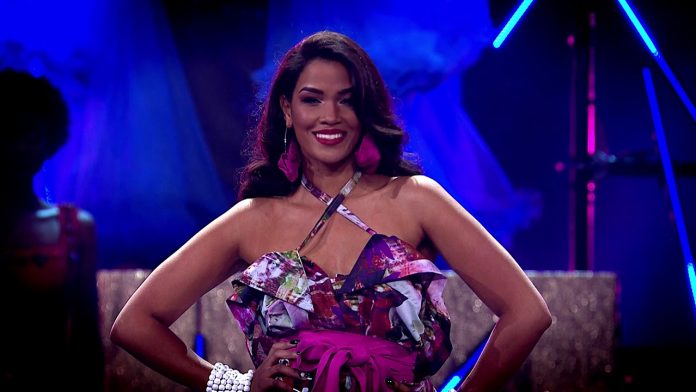 Sasha-Lee Laurel Olivier, voted one of the most beautiful women in the country at the Miss South Africa competition, is going to represent South Africa at the Miss World pageant… and she’ll be there on a mission to use the world famous platform to bring solace to survivors of sexual assault. Sasha-Lee herself was sexually abused as a child, so she understands…

On December 14, when she joins contestants from around the world in London, Sasha-Lee, will promote her ‘Beauty with a Purpose’ campaign to support, inspire and help adults and children who have been sexually abused.

Using #ItsNotYourFault as her slogan, Sasha-Lee is determined to bring solace to survivors, and help show them that they’re in no way to blame for what’s been done to them.

She says: “A very deep sense of shame accompanies rape and long term sexual abuse. Those who have suffered at the hands of the predators and perpetrators feel responsible for their own abuse, and are profoundly ashamed of what is happening, or has happened, to them. We need to desperately change the status quo regarding this – the shame does not belong to the victim at all.”

During her campaign, Sasha-Lee will reach out to people reporting a sexual attack at police stations because, she says, “These people are at their most vulnerable at this time.”

(They) sit with the feel, smell and semen of the attacker still on and in them, unable to wash or change until evidence is taken from them

Earlier this year an overwhelming 80% of police stations in South Africa have had no medical rape kits at their disposal… which means those who are raped – men, women, girls and boys – are forced to “sit with the feel, smell and semen of the attacker still on and in them, unable to wash or change until evidence is taken from them. They could wait traumatized for hours.”

With limited access to medical rape kits, Sasha-Lee is determined to help survivors on an emotional level – like she wishes she had been helped when it happened to her. To accomplish this, her campaign is distributing Rape Comfort Packs.

Each Pack contains basic hygiene products, a teddy bear, sugar and a personalised card assuring them that the attack was not their fault.

“I hope these Rape Comfort Packs offer a moment of dignity to the wounded soul in what possibly could be the worst moment of their lives,” says Sasha-Lee.

“I want those assaulted to know they are not alone; that they are seen and heard
and that their dignity has not been impaired because they have been sexually
assaulted.”

Sasha-Lee’s efforts are being supported by The Angel Network and active citizen Penny Stein who has been working tirelessly with her team to deliver thousands of Rape Comfort Packs around the country. The first child to receive such a pack was a three-year-old boy. Tragically, the need for Packs is huge. The Western Cape alone uses 1,800 a month. When Penny’s team dropped off 400 little girls’ rape comfort packs at a clinic in Alex, they were there for an hour… and in that time, four were used.

One in three women in South Africa has had some form of unwelcome sexual encounter before the age of 15. It is a shocking statistic and I am one of them.

Sasha-Lee says: “One in three women in South Africa has had some form of unwelcome sexual encounter before the age of 15. It is a shocking statistic and I am one of them.”

So, when she walks the ramp at Miss World in London in December, she will take
with her a fervent desire to make a difference in the lives of women, children and
men who feel alienated, alone and filled with self-loathing after being sexually
abused.

Sasha-Lee follows in the hallowed footsteps of past Miss South Africa winners who have
gone on to wear the Miss World Crown.

Miss South Africa 2014, Rolene Strauss, won the Miss World title in London, in 2014.
Preceding her as Miss World 1974 was Anneline Kriel and before her, Penny Coelen
in 1958.

Miss South Africa organisation CEO, Stephanie Weil, said: “We are delighted to announce that Sasha Lee will represent us at the prestigious Miss World competition.

“We intend to support her in every possible way with her Beauty with a Purpose
campaign. Gender violence is a scourge everywhere in the world, but never more so
than here in South Africa where the statistics are alarmingly high.

“We know that she will succeed at shining a much needed spotlight on this issue and
highlighting the need to act, to put an end to sexual abuse.”

The BackaBuddy link to help raise funds for the rape comfort packs – which are just R120 per pack – is here.