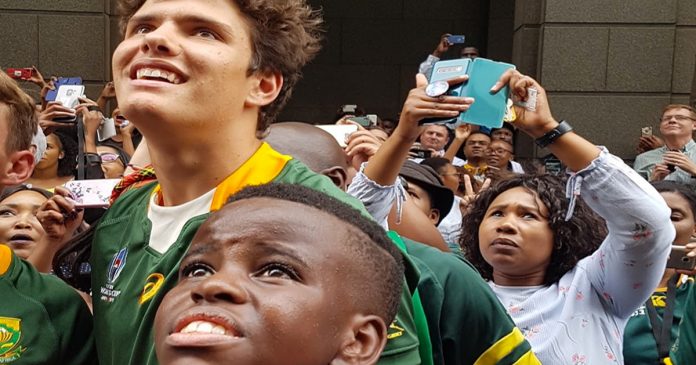 The only Springbok garment I was able to find in my cupboard, at short notice, was a vintage model from the 2011 Rugby World Cup, the one the All Blacks narrowly won on home turf… writes Gus Silber in Johannesburg, South Africa.

Still, it was green and it was gold, and there was the Bok pronking on the front, and the Faf-Speedo flag in pride of place on the bicep.

So I slipped the tee-shirt on — it fitted, loosely, I think because the whole range is tactfully designed to accommodate boeps of all shapes and sizes — and I ordered myself an Uber.

Muderwa in a Corolla arrived within three minutes, and when he saw my shirt, he said, above the music, that the Boks would have won even if they had lost, because they had played with such blood and heart.

He tapped his fist against his chest as he said this, the way the Boks do when they line up to sing the anthem. “Blood and heart,” he said. “That’s what makes them strong.”

I got out on Juta Street, in the heart of artisanal-hipster Braamfontein, with Wits just up the road, and the Nelson Mandela Bridge, with its stately masts and riggings, leading the way into town.

In the chromium heat of a highveld summer day, the kind that holds the hope of lightning and rain in its circuitry, I could smell boerewors sizzling on the braai.

I followed my nose to Bertha Street, and there I saw three okes, standing around a double-cab Hilux, the wors gushing in a pool of fat on the Cadac.

They were wearing tee-shirts just like mine, and were sipping Windhoeks and Castles from the bottle. The spiral horns of a kudu bull were affixed to the front of the bakkie, which itself was festooned with flags, so I surmised that they must have travelled a long route overland to get here.

But when I asked one of the okes where they had come from, he shrugged his beer and said “Ag, Parkhurst”, which is, like, 10 minutes up the road.

He folded a stuk of wors into a Portuguese roll, and looking around, he saw a stern-faced gogo wearing a Hands Off Venezuela tee-shirt, with the hammer and sickle of the South African Communist Party rampant.

“Would you like one?” he said, offering her the boreie roll, and the gogo nodded and took it and sat regally on a canvas camping chair to wait for the parade.

Further up Jan Smuts, the crowd was spilling from the pavement onto the street, and the best efforts of the SAPs and the Metro Cops and the private security — Bad Boyz, complete with twirly-wired earpieces, like agents of the Secret Service — could not keep them at bay.

The street was getting narrower and narrower, and every car and truck and bus and minibus taxi that squeezed into the gap was greeted with whistles and whoops and cardboard signs of welcome and swirls of flag, as if in rehearsal for the real thing.

In turn, they hooted, but everyone hoots in Joburg, so it was hard to tell if they were Bok supporters or just Joburg drivers.

A guy was wandering through the crowd, bearing a pad of green-ink and a bok-shaped stamp, and people instinctively shook their heads when he approached them, the Joburg sign for sorry, I haven’t got anything on me.

But all he wanted to do, for free and mahala, was anoint them with the Sign of the Bok, on their arms or their hands or the side of their face.

I strolled back down to Bertha, anointed, and out of nowhere, four young guys, wearing flags as capes and flags as underpants — Springbroekies, I believe they’re called — dashed whoopingly across the road, beneath a banner that read #BokBefok.

There were rumours that the bus was on its way, but they were like the rumours of the rain: it didn’t, and instead there were cloudbursts of song, murmurs rolling into swells into full-throated choruses, Shoshaloza rolling into Nkosi Sikelel’ into Hier Kommie Bokke.

And then you couldn’t hear a word of song, because everyone was pointing, waving, jumping, surging forward to meet the bus.

In the squinting distance of the cross-street, it looked to me like a big green warship, making its way home from the Odyssey, the warriors silhouetted against the silvery clouds, the sun carving a beam of light from the golden chalice.

I looked up when the bus was right next to me — I could taste the choke of its diesel, the waves of heat shimmering off the chassis — and I saw the takkies of the Boks, dangling over the edge.

And then Siya Kolisi, the Captain, acknowledging the cheers of the crowd, put his fist to his chest and held out his arm, and I understood that gesture for the first time: I am of you, it means; we are blood.

Someone down below, holding a rugby ball, caught his eye, and Siya beckoned: “Throw”.

The ball arced up to the top of the double-decker, and Siya caught it and signed and passed it around.

The school blazers flew, the school ties, the tee-shirts, like gifts to the gods, and the gods threw them back, inscribed.

I followed the bus, jostled like flotsam by the throng, across the Nelson Mandela Bridge, into town, stopping at FNB Bank City, past the City Hall and onto Simmonds, at the edge of the freeway to Soweto, and everywhere I saw a certain look on the faces in the crowd.

They were lost in the moment, unblinking, a light shining in their eyes, and I saw that look, finally, as something beyond joy, beyond pride, beyond, even, hope.

It was a sense of wonder, an exultation of the spirit, just a heartbeat away from love. And even though I didn’t take a selfie, I had the feeling that I was wearing that look too, on the day the Springboks, the 2019 Rugby World Cup champions, came to town.

*The Bok Victory Tour is in East London on Saturday, and Port Elizabeth on Sunday. Monday, Cape Town, is your turn. You can see some Instagrams from the Joburg tour over here: https://www.instagram.com/gussilber