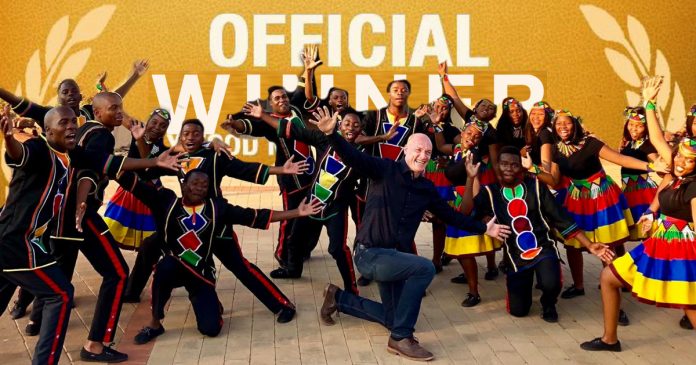 South Africa’s popular Ndlovu Youth Choir and award-winning flutist Wouter Kellerman have been awarded an international accolade at the Hollywood Music in Media Awards in the USA.

An elated Kellerman said on social media Thursday morning (Wednesday night US time): “Fantastic news!! We just heard we won the HMMA (Hollywood Music in Media Award) with the Ndlovu Youth Choir for ‘Best Independent Music Video’ for our Zulu version of Ed Sheeran’s ‘Shape of You’ ’ 🥳😍”

Kellerman added that the song is on his new album ‘In A Different Light’.

The Ndlovu Youth Choir said: “We are very excited to announce that we have won the Hollywood Music in Media Awards for ‘Best Independent Music Video’ for our collaboration with Wouter Kellerman on a Zulu version of Ed Sheeran’s ‘Shape of You’. 🙌🏾🇿🇦🇺🇸🙏🏾”

If you haven’t watched the video yet, watch below (and even if you’ve watched it a thousand times, turn it up and watch again!).

It’s probably the most brilliant version of English superstar Ed Sheeran’s hit ‘Shape of You’ that has ever been performed.

Kellerman, a Grammy Award-winning SA flutist (flautist), producer and composer, said at the time what fun they had all had creating the video. It’s now just over a year since the video was launched, and the Ndlovu Youth Choir have since become an international name themselves with their fabulous appearance on America’s Got Talent… where they made it all the way to the finals and into the hearts of every South African.