Muizenberg has become one of the most popular recreational spots in Cape Town. People of all classes and races visit the seaside suburb by the thousand. It is a microcosm of what South Africa can aspire to be. Ashraf Hendricks captured the neighbourhood’s atmosphere. 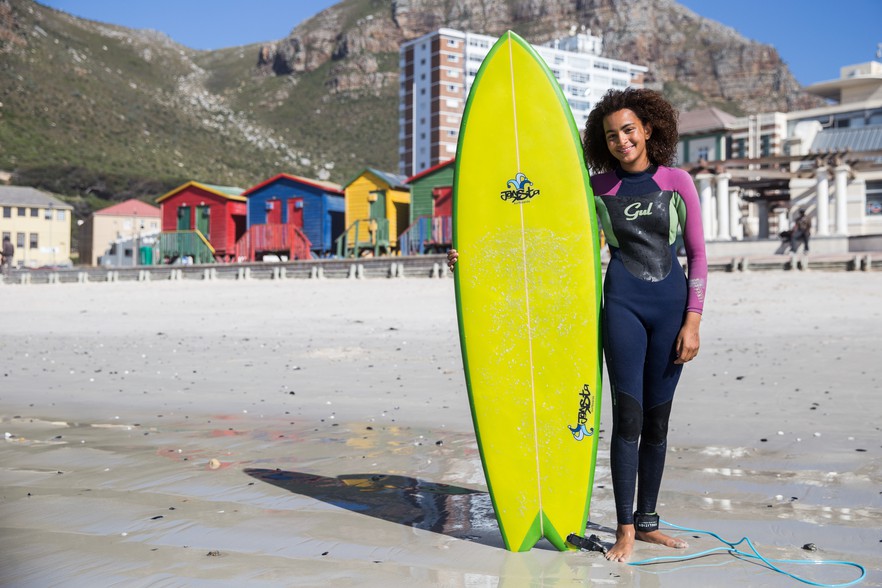 Twelve-year-old Jahnavi Syama came out to surf before she goes to school in the morning. “I just love the water and have a very big love for the ocean,” she said. Syama said that if she had all the free time in the world she would go surfing and swimming every day. She likes Muizenberg because the waves are nice and the “community is tight”.

“I’m not a professional surfer … I’m still learning how to do it.” Syama is also a climate activist and has protested as part of Fridays for Future. “I love the environment. I love the ocean. And the longer we can keep this alive we can be alive.” 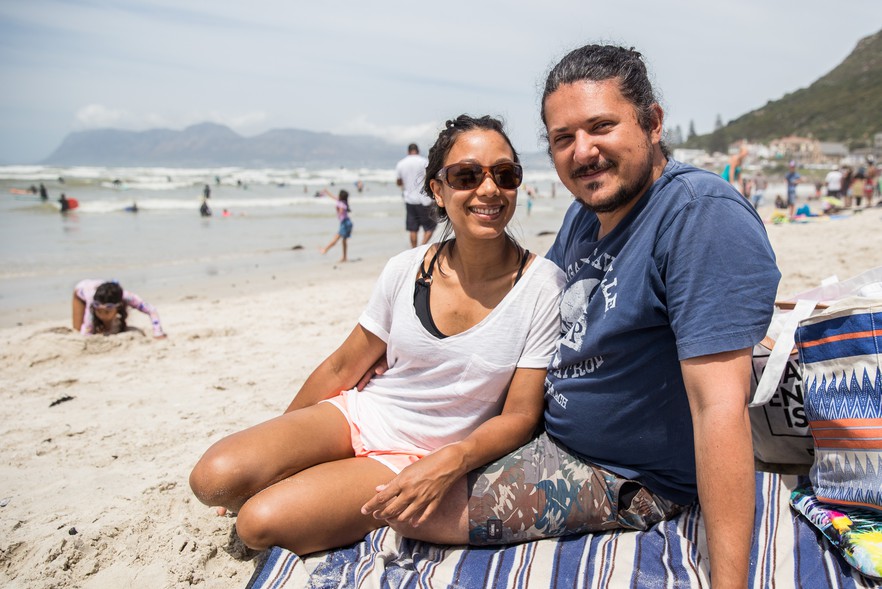 The beach makes Mark Dutlow nostalgic. He, his wife Natasha Kannemeyer and their two children were sitting on the soft white white sand. Dutlow said that he remembers swimming at Muizenberg as a child and not paying any concern to the temperature of the water. But now as an adult “it’s quite cold”.

“There is something special about this side of Cape Town,” Dutlow said. The beach attracts a diverse group of people and “it’s still very much a family beach”. 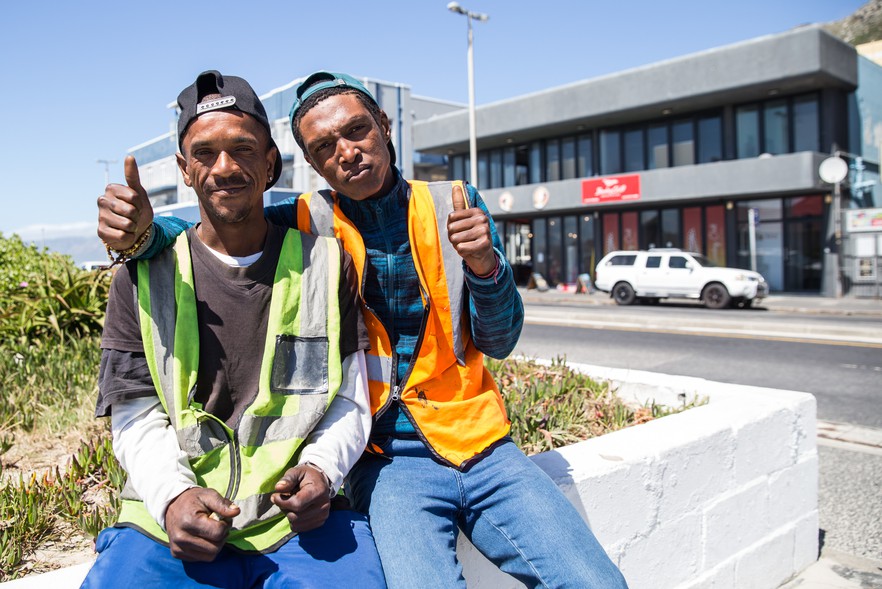 Wada Sipondo and Anthony Jacobs are car guards. “You meet good and bad people,” said Sipondo who has been doing this for more than two years. He said that Muizenberg is a good place and the people are really nice. But “you just have to be patient”.

Sipondo and Jacobs said that they always work long hours seven days a week. But sometimes, they just need to take a break if their bodies tell them to. Jacobs has been a car guard for over ten years. He is homeless and currently sleeps in the nearby mountains. 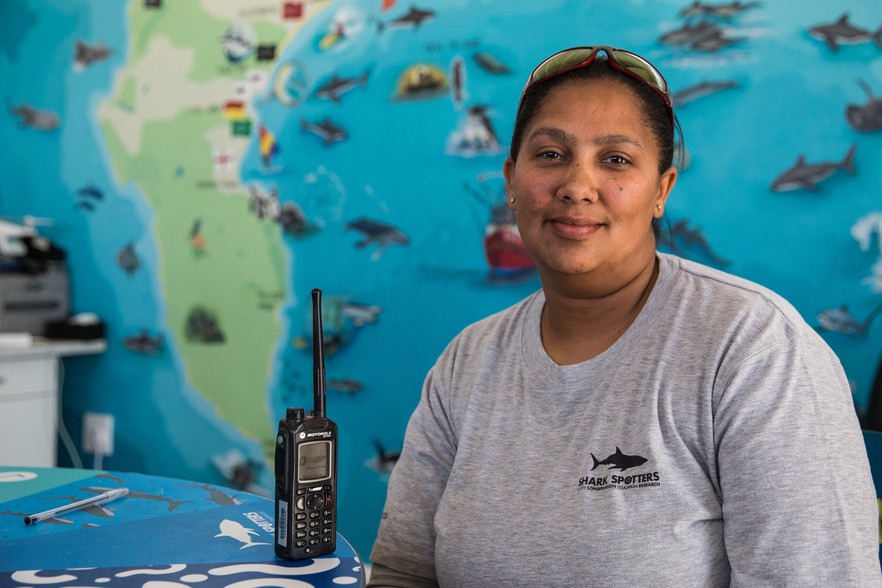 Liesel Benjamin has been a shark spotter on Muizenberg beach for 13 years. She works six days a week.

“I’m a shark spotter but I’m not really a lover of swimming,” she said, laughing.

“I like Muizenberg because I know it and I’ve been here for so long.” She said that because she’s at the beach working every day, she doesn’t come here for fun. Whenever she’s at the beach, she is always alert. “I feel like I must work when I’m here,” Benjamin said.

She will be working on Christmas and the last day of the year. 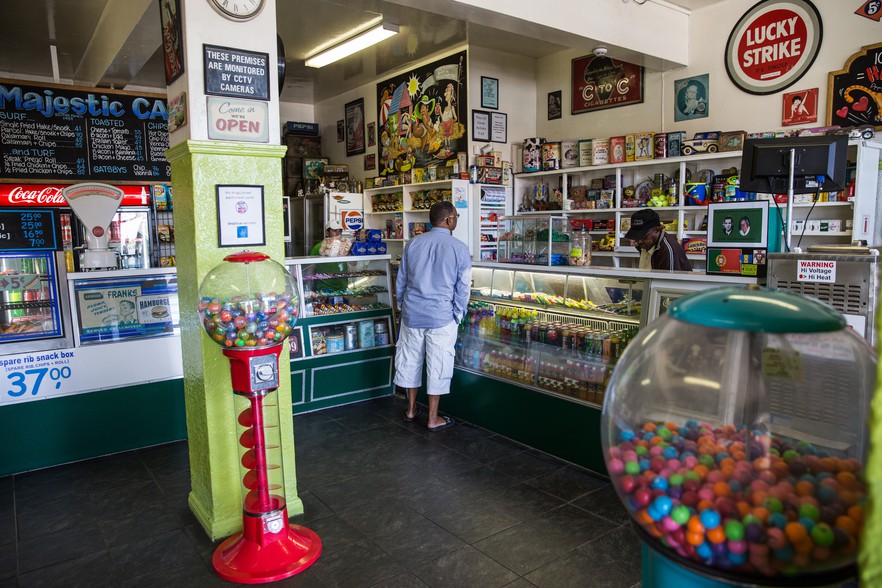 “Muizenberg has always been for everybody,” said Nelson da Silva who runs the famous Majestic Café (he didn’t want to be photographed), known for its delicious but inexpensive soft-serve ice cream. When da Silva first came to Muzenberg as a child, he said that it was a very different place. He said that when the beach first opened to all races, many people were negative about the transformation.

“The biggest thing for Muizenberg is how surfing has taken off,” he said. In the early 2000s surfing became very popular amongst everyone, especially families and girls.

Majestic Café Originally opened in 1937. Da Silva has been working in the store for 26 years and his father was the store’s fourth owner. He said that there have been attempts to cordon off the beach or add paid parking, but it hasn’t materialised. “A lot of people wanted this beach to become elitist and I’m glad it hasn’t gone that way”. 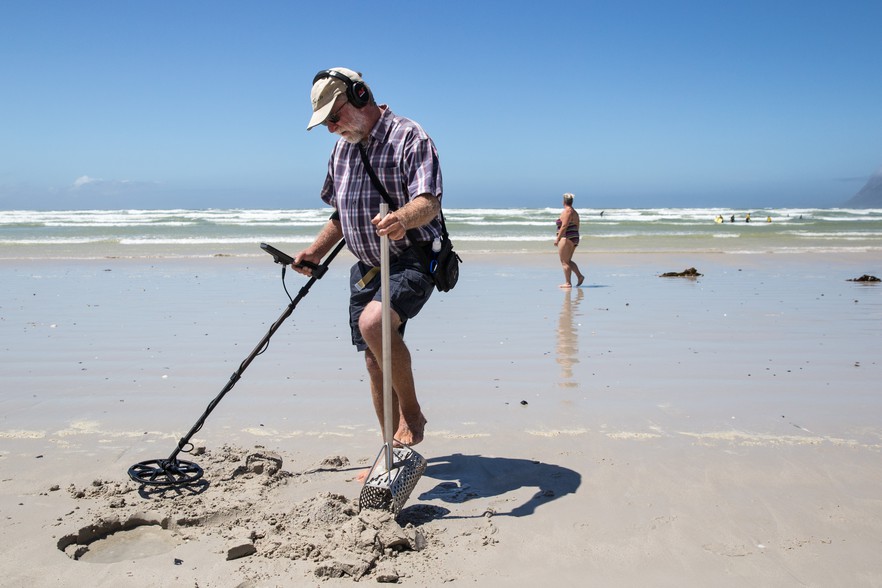 “I love it,” said Ian (who didn’t want us to print his surname). As a hobby, Ian uses a metal detector to search for trinkets and treasures on the beach. He sometimes finds jewellery and coins. He found a R1 coin during our conversation. Ian said that he prefers this beach to Clifton as it’s easier to find parking. “People mix easily here,” he said. 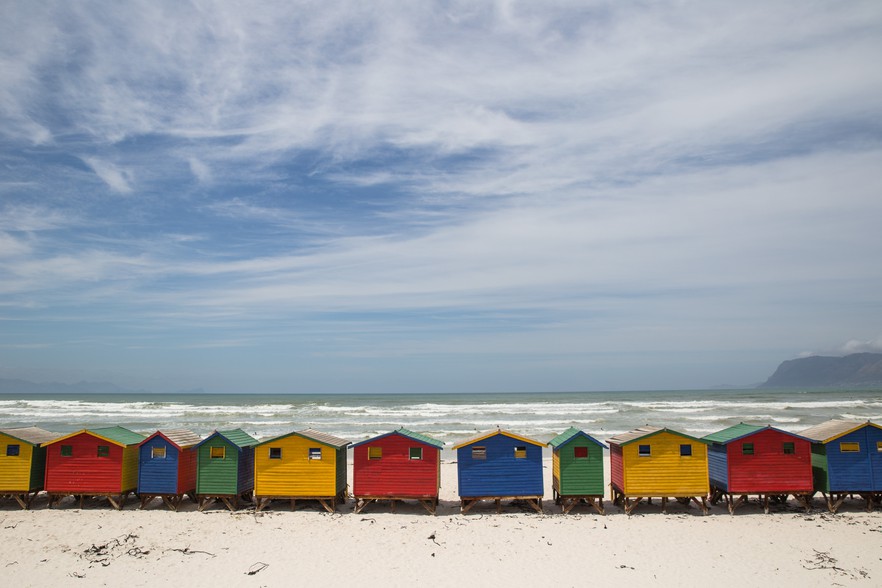 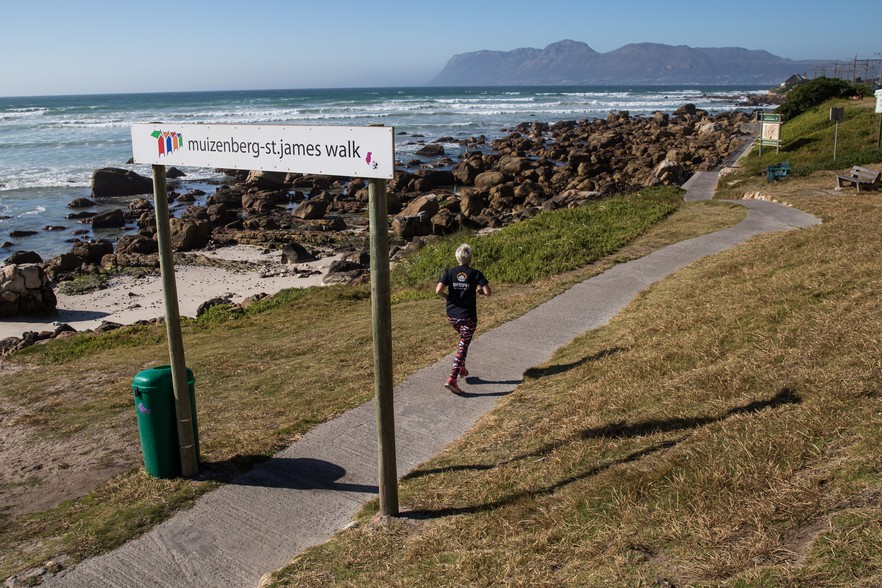 The promenade from Muizenberg to St James is popular with walkers and fishers. 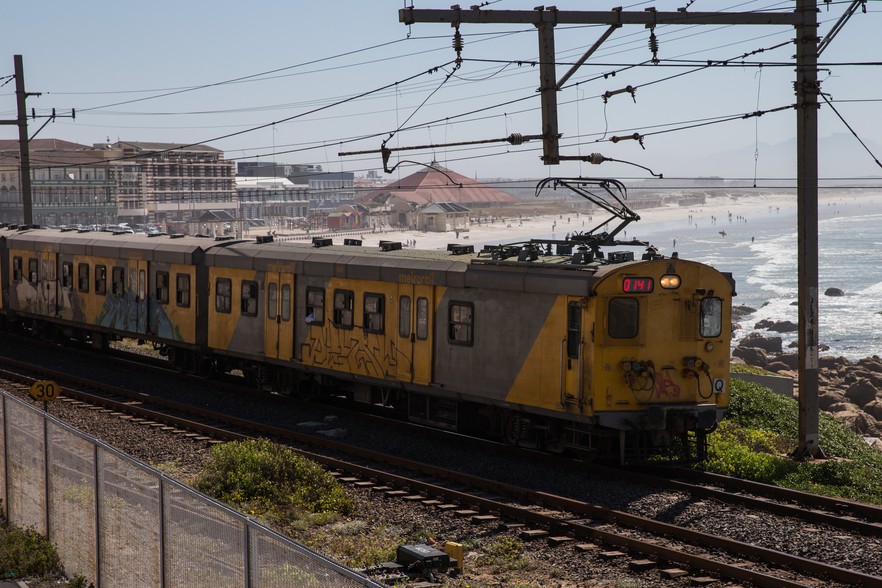 And if you’re lucky, you can spot a train going by. 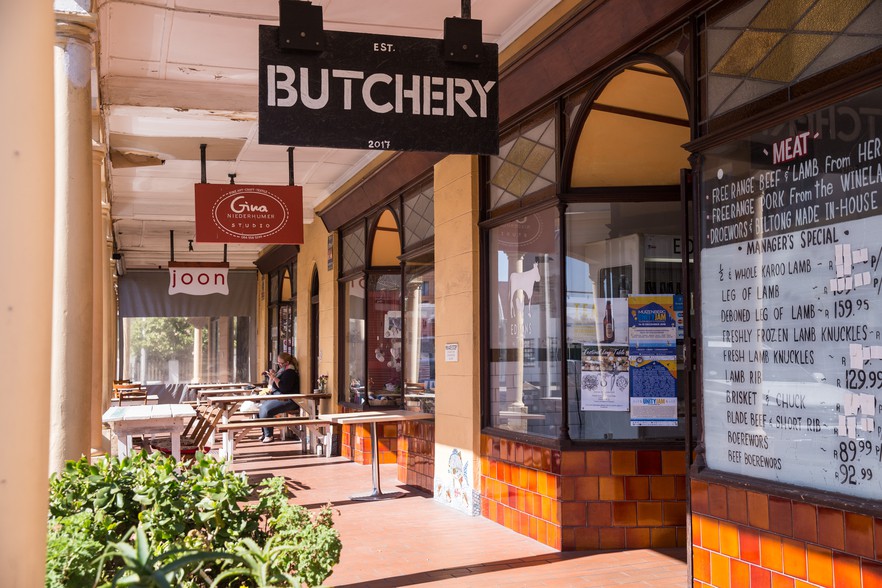 Palmer road is home to quaint restaurants and bakeries. 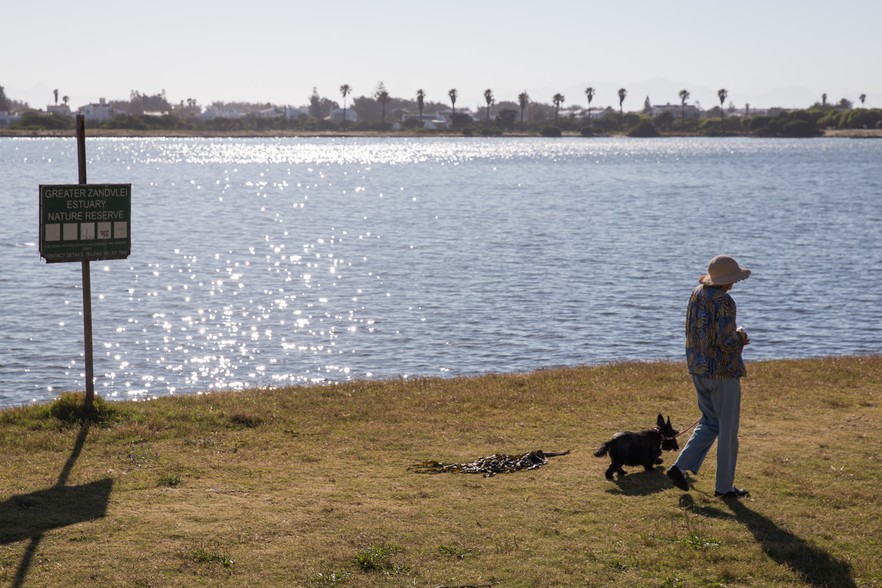 Message from GroundUp: “GroundUp is being sued after we exposed dodgy Lottery deals involving millions of rands. Please help fund our defence. You can support us via Givengain, Snapscan, EFT, PayPal or PayFast.”