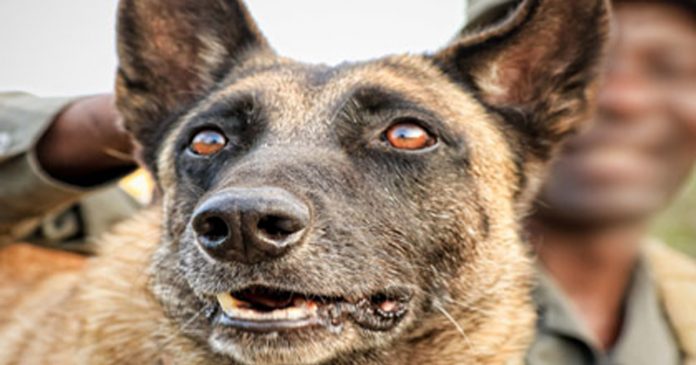 The multiple award-winning wildlife crime thriller, ‘STROOP – journey into the rhino horn war’, received its 26th award this weekend when the documentary’s filmmakers, Susan Scott and Bonné de Bod were honoured with the SANParks Kudu Award for Best Television Journalism for 2018/2019.

The film – which has received so many accolades from around the world, and helped raise awareness for the plight of SA’s rhino – means a lot to SAPeople members whose crowdfunding at the beginning played a part in helping ensure the important film did get made. (You can stream Stroop on Showmax here.)

In addition to the coveted Kudu trophy, the award comes with a R20,000 cash prize which the filmmakers will be giving to the Special Ranger K9 Unit based in the Kruger National Park.

“So thrilled that we can give back to fight on the ground,” said television presenter and filmmaker Bonné de Bod at the glittering award ceremony held at the Gallagher Convention Centre in Midrand on 29 November, adding “the dogs are a successful component to the unit and despite being ‘low-tech’, they are costly to have and we urge those in the public to give if they can to efforts there”.

Director Susan Scott added, “this very unit is featured in STROOP and they allowed us access into their closed world for several years, which of course is just incredible to have that kind of access at the epicenter of the rhino horn war, but this was hugely brave of them to trust us to tell their story to the world.

“It’s only fitting that we give back to them and we also know they will put this money to better use than we ever will!”

For their last cash prize, the passionate Stroop filmmakers shared the money with their mothers who they had moved in with during the four years of filming, when they had to sell everything to financially support the movie getting made.

This time the filmmakers will be donating the full cash prize to the SANParks Honorary Rangers who will ensure that the elite fighting unit in the Kruger will receive the donation.

Scott and de Bod already have an established relationship with the SANParks Honorary Rangers who receive a percentage of STROOP DVD sales from the Park’s Shops inside the Kruger National Park.

The filmmakers have stipulated that these funds directly benefit the ranger efforts inside the park.

Hosted annually, the Kudu Award is one of the country’s top conservation prizes given by the South African National Parks (SANParks) to recognize deserving conservationists including SANParks staff, NGO partners as well as the media.

According to Fundisile Mketeni, SANParks CEO, “Awareness of conservation issues is of vital importance and if we want to better protect our national parks… we need to educate and inform the public. The media are key in this role. Tonight we honour those leading the way in informing the world.”

The panel of judges said that the filmmakers were being recognized for creating an outstanding rhino awareness tool through the medium of storytelling and that they had made an immense contribution to dissemination of conservation information through the use of television.

The eye-opening, world-acclaimed documentary had its African television premiere on M-Net on World Rhino Day and screened in Afrikaans on kykNET back in September. STROOP is currently available on Showmax in SA and overseas (in most countries). (If you haven’t watched it yet – take advantage of Showmax’ special 14-day free offer and you can watch it now.)