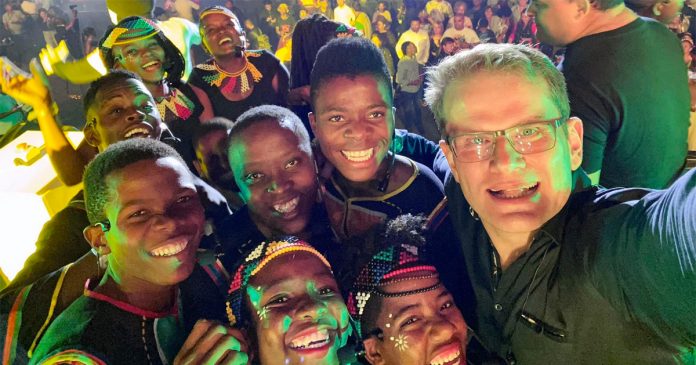 Since returning home to South Africa from their incredible performance in the USA where they made it to the finals on the world’s biggest stage, America’s Got Talent (AGT)… the Ndlovu Youth Choir, from Limpopo, have made even more dreams come true – an international award, performing to over 100,000 people in Cape Town (pic below), and topping the SA iTunes music chart!

115000 people going mad for Ndlovu. What an unforgettable night!

Their debut album – simply and powerfully titled ‘Africa’ – shot straight to the top of the South African iTune charts when it was launched last week.

The Choir said: “It’s a dream come true to finally have our debut album out for you to listen to. We hope our music fills you with joy, hope and above all, love.” They said, in a press statement, that they wanted the album “to represent the hopes and dreams of the African continent and particularly the youth”, and that it was dedicated to the amazing support they received from South Africans during the AGT competition.

Artistic director Ralf Schmitt said: “The album was created because of the love we were receiving from our fellow South Africans.”

At the time of AGT, South Africa had been going through a particular tough period (before the euphoria of the Rugby World Cup Win)… and the Ndlovu Youth Choir virtually single-handedly lifted the spirits of a nation with their voices and filled the country with desperately-needed pride and inspiration, as they flew the flag high for SA overseas and reminded South Africans how brightly they can shine.

After ‘Africa’ shot to the top of the iTunes charts after just a few hours, the Choir said: “We are once again overwhelmed by all the love and support.”

The album contains all the music the Ndlovu Youth Choir performed on America’s Got Talent, plus “exciting new unreleased music that we have never performed, as well as our first original track”. The album was recorded with several producers around the world.

In the last few days the group has expressed even more gratitude for the “love and support” they received in Cape Town, performing to thousands of passionate fans at the Cape Town light festival and at the beautiful Oude Libertas Amphitheatre.

“Just performed to over 115 000 people on a perfect hot African summer night,” the Choir said on one evening… posting celebratory photos.

The Ndlovu Youth Choir first came to the nation’s attention last year when they collaborated with flutist Wouter Kellerman on an unbelievable Zulu version of Ed Sheeran’s ‘Shape of You’. It was no surprise when they were awarded Best Independent Music Video at the recent Hollywood Music in Media Awards ceremony.

And the Fairytale Continues…

The fairytale continues. This weekend the Ndlovu Youth Choir will be performing in Berlin at one of Europe’s biggest charity events (Berlin at Herz für Kinder).

Schmitt says: “Our dream is to continue inspiring young people, keep doing what we’re doing, remain humble, keep our feet on the ground and to never forget where we are from.

“If we can continue doing that, then there will be more joyous music to come from it in the future.”

In a post on Facebook, Schmitt said: “From a tiny Limpopo village to a global release. Track 4, ‘Believe’ is a song I wrote for the choir with a message about the road ahead after our fairytale journey…”

A very special moment holding our very own album for the first time. The album is available in stores and across all…

Just performed to over 115 000 people on a perfect hot African summer night. #Africa

Thank you Cape Town for all the love and support you showed us this weekend. We had a performance at the beautiful Oude…