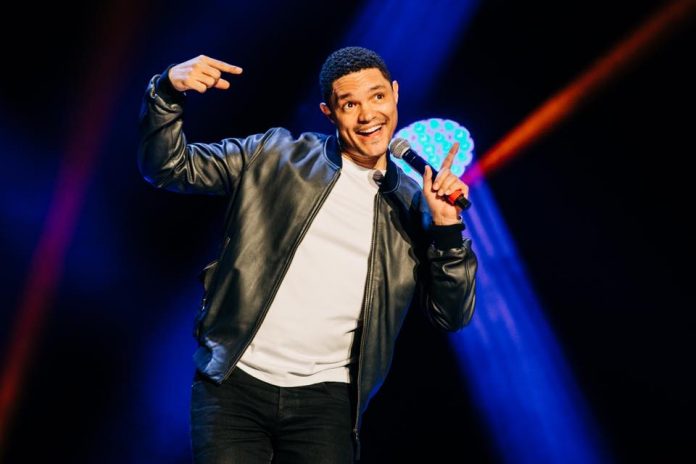 South African comedian and host of the Daily Show, Trevor Noah, has tweeted a challenge to tennis star Roger Federer and businessman Bill Gates regarding the much-anticipated ‘Match in Africa’, to be played on 7 February in Cape Town, which will raise funds for children’s education on the planet. And he’s not joking!

Trevor – who is one of South Africa’s most famous expats, based in New York – tweeted: “Hey @RogerFederer, you & @billgates want to play doubles against me & @RafaelNadal!? Okay. We accept your challenge, but be prepared for the crowd in SA to be on our side! See you Feb 7 in Cape Town! Masihambe (Let’s Go)!  #MatchInAfrica”

Hey @RogerFederer, you & @billgates want to play doubles against me & @RafaelNadal!? Okay. We accept your challenge, but be prepared for the crowd in SA to be on our side! See you Feb 7 in Cape Town! Masihambe!  #MatchInAfrica

The Match in Africa 6 will open with the Pro-Celebrity doubles match at 19h30 – Bill Gates and Roger Federer vs Trevor Noah and Rafael Nadal). Bill Gates has played before (this is the sixth edition of the event)… but it will be Trevor’s first time.

Entertainment and the main feature match will start at 20h30. The main match features Federer vs Nadal (and not Novak Djokovic as one Cape Town shopping mall mistakenly advertised!)

This will be Federer and Nadal’s first time facing each other on African soil.

For those lucky enough to have tickets – please note, gates to the Stadium will open three hours before the start of the event (16h30) and close one hour after the completion of the feature match.

Entertainment at the Match in Africa

The entertainment comes in the form of South Africa’s Ndlovu Youth Choir who lifted the country’s spirits in September last year, during a tough time in SA, when they soared on America’s Got Talent… making it through to the finals; and the Zip Zap Circus, a Cape Town-based social circrus that works with a diverse community of children.

How and Where to Watch the Match in Africa

The event will be screened on SuperSport from 18h30. You can stream it live on DStv Now!

1. Go to now.dstv.com and download the DStv Now app for Apple or Android.
2. Open the app and tap Register.
3. Enter your ID number and follow the prompts to create a username and password.
4. Go to Live and start watching SuperSport.

If you don’t have access to Wi-Fi, stream SuperSport with DStv Now data bundles from Telkom, Vodacom or MTN. Remember: go into Quality Settings in the app and choose a lower setting so you use less data when you stream.

If you’re living abroad, check the site for info on which channel is showing the tennis in your country.

The Roger Federer Foundation has been raising funds for more than 16 years for charitable programmes in African and Switzerland, aimed at giving children a good start in education. According to the Foundation, over 1.5 million children have benefitted from the interventions with a total expenditure of more than USD 52 million.