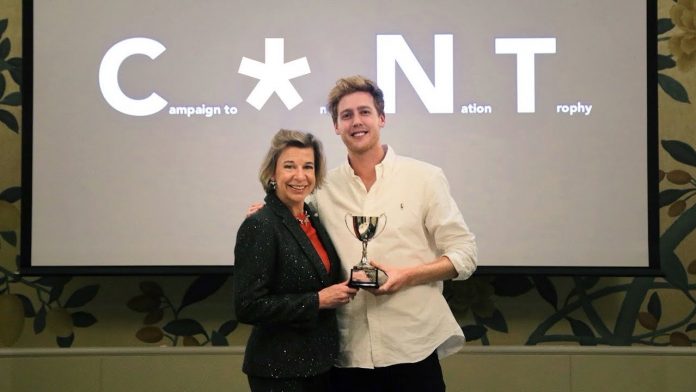 South African expat and well known YouTuber, Joshua (Josh) Pieters, has pranked a controversial British columnist with a fake award he flew her to Prague, in the Czech Republic, to accept!

Katie Hopkins is notorious in the UK for her inflammatory and often racist, ageist, fat-ist, anti-feminist remarks against virtually everyone (watch the video below!). Last week her Twitter account was suspended for hate speech.

Pieters – a social media star from Knysna – targeted Hopkins after she claimed that photos of drowned migrant children were just a publicity stunt.

Pieters, who is now based in London and has a following on YouTube of over 1.28 million subscribers, told Insider magazine that just as he was feeling bad about being mean to her, she delivered her acceptance speech which was filled with appalling remarks.

Twenty-six year old Pieters told Insider there were moments during  the evening he had to escape to the bathroom because he couldn’t hold it together (everyone had been told to stay in character for the evening). “It was a very surreal, in a bad way, night. I felt like we were teleported into an alternative reality where we were all billionaires sitting around a table, drinking wine and being racist,” he said.

The video has already been viewed over 4.3 million times!

The prank began three months ago while Pieters was on holiday in Cape Town. He and Archie Manners created a fake organisation – the Cape Town Collective for Freedom of Speech… and wrote to Hopkins, announcing she was the recipient of their equivalent of a lifetime achievement award. Last week Hopkins received that award in Prague… watch the video below.

Gauteng publicist Georg Knoke says: “This is hilarious! How to give an outspoken super racist a taste of some of her own medicine!”

Knoke cautions: “Don’t be offended – this woman has hurt many many with her sharp tongue!”

WATCH VIDEO BY JOSH PIETERS: I Flew Katie Hopkins to Prague to Win a Fake Award

Now that Katie Hopkins can’t read Twitter, I can tell you that on Monday I made her fly to Prague to pick up a completely fake award. Video up shortly. pic.twitter.com/8EeQsQX6U3