A Sedgefield couple are on a mission to help street children transition from vandalism and petty crime, to attending school and gaining an education to become positive contributors to society. We all know that the authorities and Education Department should be doing this… but until they do, South Africans can’t afford to waste time complaining about the rising crime. Instead, just like in Harrismith where the community is fixing the town itself, some like Karen and Jurgens van der Walt are doing something about it… with the help of their community. Here’s Jurgen’s story…

Five years ago, when we moved to Sedgefield, a small village in the Garden Route between Wilderness and Knysna, in South Africa, we thought that we had found paradise…. writes Jurgens van der Walt.

But we very soon realised that there are a number of serious problems. One of these is that there are groups of children who roam the streets instead of attending school.

One particular group of kids aged between 8 and 14 years of age is known by all the security companies and the police. Their days consist of begging, stealing, smoking weed and vandalising municipal property, all the while trying to stay alive and protect themselves and their belongings from other groups.

Some years ago I approached the authorities about these children but the councillor for our area said there wasn’t much we could do. There is no money allocated to address this problem and no one to assist the kids.

Over the years I had some unpleasant experiences with this group. I saw them throwing stones at lampposts totally destroying the streetlights. When I approached them, they laughed and swore at me and made signs to show that they would cut my throat.

By mid-2019, the community was becoming really fed up with these children. Basically, people were just waiting for them to turn 18 so they could be jailed. But Karen and l were determined to find a way to help these children, knowing full well that the government would not assist them.

Sedgefield hosts a major food, arts and crafts market on Saturday mornings. About five months ago the children themselves gave me an idea of how to help them. They were dancing and singing and begging for money at the market in their dirty clothes. But the security guards chased them away, concerned that they would steal and vandalise.

The idea came to me that if we could teach these children how to perform and dress them as a group, it might change their attitude and the attitude of people towards them. They would then be able to perform at the market. I phoned a few people and asked them whether they would be willing to help.

At first the children didn’t want to speak to me because of previous encounters. But eventually I got to speak to two of them and arrange a time to talk to the whole group.

We made a deal that they would attend dance and singing classes twice a week; they would also stop harassing people, begging, and vandalising property.

My main focus was to get them back to school since most of them had been expelled in previous months or years. They all said they wanted to go back. With donations from the community we got them outfits to perform in.

We arranged with a charity Slow Meals for them to receive a cooked meal on Mondays, Wednesdays and Fridays. On Tuesdays and Thursdays, they had practice sessions and their meals were sponsored by volunteers from the community.

On their first Saturday performance the Top Shots made a fair amount of money. We gave each member R50 pocket money and banked the rest of their money with a registered NPO, Hephzibah Solutions, that worked with some of these children on a government programme called “Youth in Conflict with the Law”. They also arranged drug counselling sessions and support.

After the first month we told the community on our Facebook page (Sedgefield Locals) what we had already achieved.

We received some donations from the community, and the most wonderful thing happened… the attitudes of the children and the community towards each other changed.

On the best Saturday busking at the market they collected even more. The children are now able to pay for their own uniforms and food when it is not sponsored.

In January they asked us to help them to get back into school. I couldn’t believe my ears. We took them to Pep and they bought their school uniforms with their own money that they had worked for.

Some of the parents could not go to school with them so I met them at the school to enrol. They looked and felt great. We all sat in the reception waiting to find out what would happen next. I was called in to see the principal who told me that the kids were not welcome in their school.

At first I was really disappointed and unhappy with her decision. But after she explained what the children had done previously at the school, I understood her concerns. Some of them haven’t attended school in three years. How on earth does that happen!? They would have to put a 14-year-old streetwise child in the same class as an innocent 10-year-old. Not to mention their history of vandalism and drug abuse. The children were very disappointed when I told them. 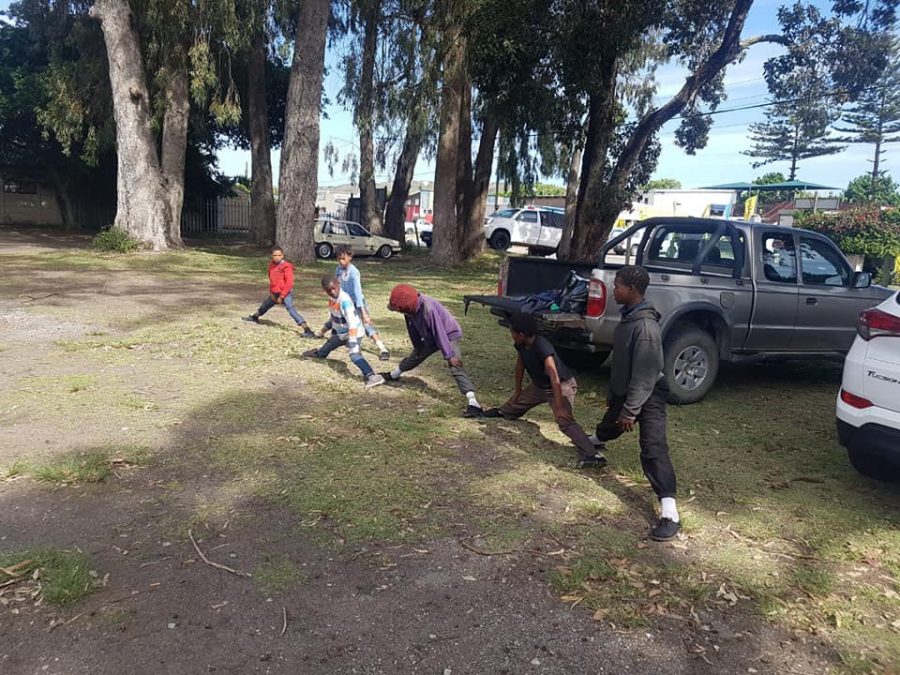 As a last resort, the principal set up a meeting with all the teachers. This meeting made it clear that taking in the kids would jeopardise the chances of the other 600 learners. The school is already overcrowded with more than 50 children in a classroom.

This means we are stuck. But I have an idea to find or build a workshop.

In Sedgefield we have lots of young at heart, retired engineers, teachers and social workers to teach these children, and other children like them, basic skills and get them up to a level so that they can re-enter normal classes or pursue a trade.

In the meantime we have decided to contact some home schooling facilitators. The CEO of a reputable distance education institution called me the next day and offered to sponsor these children with learning material. We must now evaluate them to see on what level they really are.

We got hold of the Western Cape Education Support Services and met a team of very enthusiastic Psychologists that will do the assessments.

“My big dream is to build a workshop/studio in our township where we can teach much needed skills,” Jurgen told SAPeople. “50% of children going to high school become dropouts because the Education department force schools to push children through the system. The result is these children can’t read, write or calculate. And conveniently the department’s responsibility ends at the age of 15. Small Sedgefield has plenty of these children.”

Can You Help with Advice, or do you know someone who could?

Jurgens says what they need most is good advice. “We are not qualified in this area and don’t want to re-invent the wheel. I assume there are successful programs elsewhere. It’s very important that more people start to get their hands dirty and help the millions of children like this small group.”