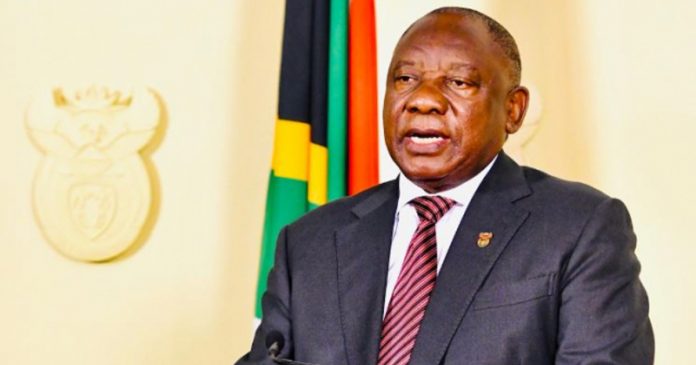 President Cyril Ramaphosa and his Cabinet will over the next three months take a pay cut of 33% in their salaries – as government ups the ante on the fight against the impact of COVID-19 on the economy.

The drastic move was announced by President Ramaphosa on Thursday evening, while addressing the nation on the extension of the 21-day lockdown in South Africa by a further two weeks. This as the number of confirmed cases climbed to 1 934 cases.

The portion of the salaries, he said, will be donated to the Solidarity Fund. The Premiers have also followed suit.

“We’re calling other public office bearers and executives of large companies to make a similar gesture to further increase the reach of this national effort,” he said.

The Solidarity Fund is an independently administered vehicle which aims to “flatten the curve” and lower infection rates and offer relief to those who need it the most.

President Ramaphosa also announced other measures to ease the economic impact of the COVID-19 on small businesses.

To curb job losses, the President said the UIF has set aside R40 billion to help employees who will be unable to work due to the lockdown and has since paid out R356 million.

The President urged businesses to continue paying suppliers in an effort to ensure that they remained functional.

“In this respect, I would like to appeal to all large businesses not to resort to force majeure and stop paying their suppliers and rental commitments, as such practice has a domino effect on all other businesses dependent on that chain,” he said.

In the address, the President announced that the IDC has set aside R3 billion for the procurement of essential medical supplies. The agency has already approved R130 million in funding and expects to approve a further R400 million in the coming week to companies who applied for funding under this special facility.

The Small Enterprise Finance Agency has approved the postponement of loan repayments for a period of six months.

There is a total of R500 million available in support.

Government has reprioritised R1.2 billion to provide relief to smallholder farmers and to contribute to the security of food supply.

“In addition to these expenditure measures, the Reserve Bank has also lowered interest rates and has taken measures to inject liquidity into the economy,” said President Ramaphosa.

Building the stocks of medical equipment

As world countries face medical supply shortages to tackle the Coronavirus, the South African government has to rely on its own capabilities to supply these. However, the supplies were also being sourced from abroad.

“In recent weeks, we have seen a massive mobilisation of South African business, labour, academics and government agencies to build the stocks of medical and other equipment needed to fight Coronavirus.”

Government has also established the National Ventilator Project which is aimed at rapidly mobilising technical and industrial resources in an effort to manufacture non-invasive ventilators that will support patients afflicted with the disease.

“Other projects are focusing on increasing the local manufacture of protective face masks, hand sanitisers and pharmaceutical products which can be used by health care workers and the public at large,” he said.

“As the third part of our Coronavirus response, we have been working to provide basic needs such as water and to maintain the reliability of food supply to the poorest South Africans.”

Other interventions have seen government expand the provision of food parcels and financial support for spaza shops.

The President also announced that the Solidarity Fund – which was established to mobilise resources from companies, organisations and individuals to combat the Coronavirus pandemic – has raised about R2.2 billion since its establishment.

Of this, R1 billion has been set aside for the purchase of sterile gloves, face shields, surgical masks, test kits and ventilators. The Fund is also expected to allocate funds for humanitarian relief to vulnerable households, in addition to the R400 million set aside by government for Social Relief of Distress grants.

“All of these efforts, while necessary and commendable, will not be sufficient on their own to cushion the poor from the impact of this pandemic,” said President Ramaphosa.

He added that additional extraordinary measures will need to be put in place in the coming weeks and months to absorb the sudden loss of income to both businesses and individuals.

In this regard, he said the Cabinet will be developing a comprehensive package of urgent economic measures to respond both to the immediate crisis and to the severe economic challenges that need to be confronted. – SAnews.gov.za